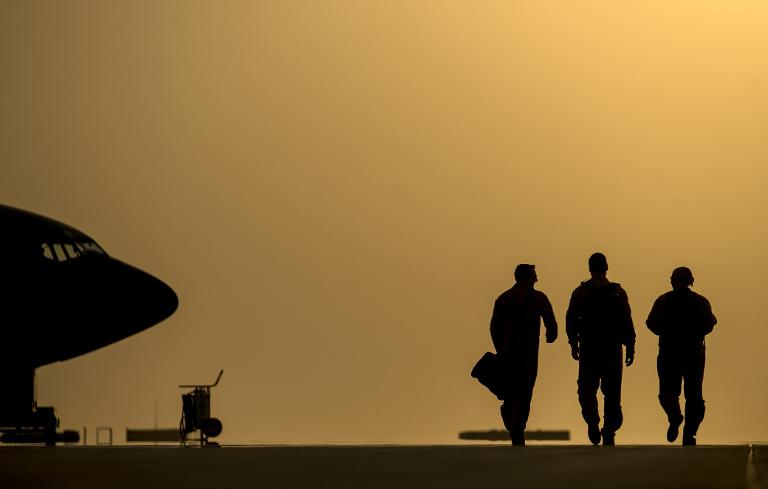 The new strikes deepen Washington’s involvement in the conflict and were a significant escalation for President Barack Obama, who made his political career opposing the war in Iraq and pulled out US troops in 2011.

Previous strikes since the US air campaign began on August 8 had been mainly in support of Kurdish forces in the north.

US warplanes bombed IS fighters around a strategic dam on the Euphrates River in an area that the jihadists have repeatedly tried to capture from government troops and their Sunni militia allies.

“We conducted these strikes to prevent terrorists from further threatening the security of the dam, which remains under control of Iraqi security forces, with support from Sunni tribes,” Pentagon spokesman Rear Admiral John Kirby said.

“The potential loss of control of the dam or a catastrophic failure of the dam — and the flooding that might result — would have threatened US personnel and facilities in and around Baghdad, as well as thousands of Iraqi citizens,” he added.

Iraq moved on Sunday to capitalise on the strikes, launching a drive against militants in the Haditha area.

The troops and militia retook the town of Barwana, east of Haditha, from the jihadists, who abandoned their weapons and vehicles in their retreat, an AFP correspondent reported.

Troops lowered the black IS banner from the town’s main checkpoint and raised the Iraqi flag.

The only previous US strikes against IS outside of northern Iraq were carried out in support of an operation by the army, Shiite militia and Kurdish fighters to break a months-long siege of the Shiite Turkmen town of Amerli, north of Baghdad.

Dams have been a key target for the jihadists, and there has been major fighting around Iraq’s largest dam, on the Tigris River north of militant-held second city Mosul, which has been a major focus of the US air campaign.

The Haditha and Mosul dams are important sources of both power and irrigation water for farmers.

Western governments have come under mounting pressure to take strong action against IS, which controls a swathe of neighbouring Syria as well as significant territory north and west of Baghdad.

The jihadist group has carried out a spate of atrocities in areas under its control, some of which it has videotaped and paraded on the Internet.

The United Nations has accused IS of ethnic cleansing in northern Iraq, detailing a campaign of mass detentions and executions in Christian, Turkmen and Yazidi Kurdish areas.

The beheading of American journalists James Foley and Steven Sotloff has added to the pressure on Western leaders.

Western governments have voiced mounting concern that nationals who have gone to Syria or Iraq to fight with IS will return home to carry out attacks.

A French journalist held hostage in Syria by IS said in comments published Saturday that one of his captors was a Frenchman of Algerian descent.

Obama outlined his plan for a broad international coalition to combat IS at a NATO summit on Friday, an announcement praised by Iraqi Foreign Minister Hoshyar Zebari.

“We welcome that, and we have repeatedly called on our international partners for help and support because this threat is a very deadly threat… not only to the people of Iraq or the region, but to Europe, to America, to NATO,” Zebari told AFP.

Arab League chief Nabil al-Arabi called on the bloc’s 22 members to confront IS militarily as well as politically.

“What is needed is a clear decision for a comprehensive confrontation, militarily and politically,” Arabi said at a meeting of Arab foreign ministers.

“There is still no serious understanding about the threat and they have as yet taken no serious action,” he said.

Washington has said operations in Syria will be needed to defeat IS, but has so far ruled out any cooperation with the government in Damascus for fear of driving other Sunni rebel groups to make common cause with the jihadists.

The Syrian military carried out its own air strikes against the IS on Saturday, killing 53 people in the IS-held city of Raqa further up the Euphrates Valley, a monitoring group said.