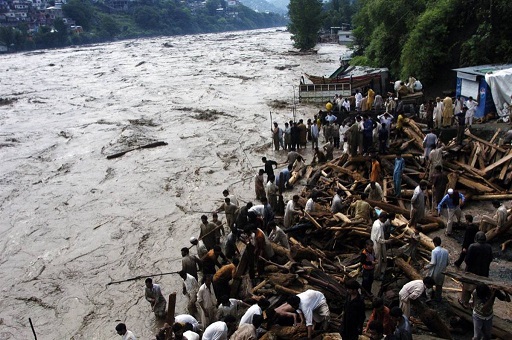 Jammu: Jammu and Kashmir is facing its worst flood in nearly six decades, claiming 160 lives so far. Army has launched a major rescue operation and evacuated 11,000 people to safety by deploying 100 columns of troops in flood-hit areas of the state.

“A total of 11,000 civilians have been rescued, out of these 2,000 people have been provided food and temporary shelter in Jammu and Kashmir,” Defence spokesman S D Goswami saidÂ on Saturday.

A total of 100 columns of army, 13 teams of Army engineers have been deployed in the Kashmir and Jammu regions, he said. One army column consists of 75 to 100 troops.

Prime Minister Narendra Modi reached the state on Sunday to personally review the situation and assess the damage caused.

The decision to visit the state came following a review meeting which Modi called after being briefed on Saturday by Home Minister Rajnath Singh who returned to Delhi after surveying the flood-affected region. “Mr Abdullah himself drove the car and showed me Srinagar’s conditions. I want to assure people and the CM that the Centre is with the state in this crisis,” Rajnath had said on Saturday after he reviewed the situation in the state.

Modi will first travel to Jammu where he will undertake an aerial survey, sources said. Later in the day, he is scheduled to go to Kashmir and take stock of the situation there.

Army has intensified its ‘Mission Sahayata’ and troops are working tirelessly to rescue people trapped in flooded villages, isolated houses and multi-storied buildings in the inundated areas all over Kashmir, Goswami said.

As the number of shelter less people is rising, Army is also providing tented accommodation to hundreds of people, he added.

Later, ‘Mission Sahayata’ was launched to cover areas of the entire Valley, he said.

By September 4, eight major columns were put to service, Col Goswami said adding that over 400 people were taken to safety. “In addition to these, large number of people were assisted to relocate themselves, many vehicles stuck inside water were recovered and food packets were distributed,” he said.

By September 5, there were 70 major columns and 12 engineer teams operating in Kashmir and by the night over 5,000 people were rescued.

On September 6, a column of Army operating at Kakapora of Pulwama district became a victim of the flood. A boat carrying 11 personnel capsized and they got stranded, he said.

“Till filing of this report, two soldiers are still stranded in the area,” he said.

“In Kashmir, hundreds of families that moved to upper stories of their houses due to inundation of ground floor, are yet to be reached.

“Joint Control Room and helpline centres established by Army in Kashmir are getting frantic calls from people and dispatching columns to rescue them,” he said.
Â