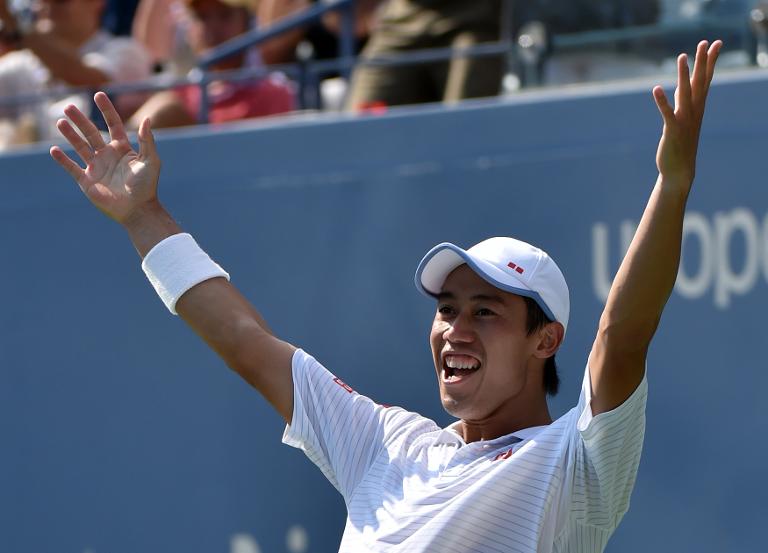 Japan’s Kei Nishikori became the first Asian man to reach a Grand Slam final when he swept past seven-time major winner Novak Djokovic in the US Open semi-finals on Saturday.

Nishikori, the first Japanese man since 1918 to reach the semi-finals in New York, goes on to face either 17-time Grand Slam champion Roger Federer or Croatia’s Marin Cilic in Monday’s championship match.

His victory over Wimbledon champion Djokovic will go down as one of the sport’s greatest shocks.

The 27-year-old Serb was the 2011 champion in New York, was playing in his eighth successive US Open semi-final and bidding for a sixth final, his 15th overall at the majors.

The top seed was also looking to make his third Grand Slam final of 2014.

In contrast, prior to Saturday, the 24-year-old Nishikori’s best effort had been a run to the quarter-finals of the 2012 Australian Open.

“I don’t know what’s going on,” said a breathless Nishikori.

“I was a little bit tight especially as it was my first semi-final in a Grand Slam but it’s just an amazing feeling to beat the number one player.

“It was tough conditions, it was a little heavy and humid but I guess I love to play long matches.”

Nishikori said that the key was to forget about the one-sided second set.

“He started to play much better, very consistent and more aggressive. I tried to forget about the second set and tried to concentrate again.”

The Florida-based star also praised the work of coach Michael Chang, a Grand Slam winner with the French Open title in 1989.

“He’s been helping me a lot. We’ve been working well so that’s why I’m here.”

He added: “I hope it’s big news in Japan. Even though it’s 4 o’clock in the morning I hope everybody’s up watching.”

Djokovic, playing in his 17th semi-final of the last 18 Grand Slam events, admitted Nishikori was the better player.

“He played some great tennis. I congratulate him for the effort. He was the better player today,” said the Serb.

“I think he wasn’t using forehand as well as he does now. His backhand is very solid. One of the best double-handed backhands from all over the court. Really aggressive. He’s very quick, so he gets a lot of balls back. Uses every short ball to attack. I think now he’s all-around player.”

Despite playing back-to-back five-setters over eight and half hours to get to the semi-final, 10th seed Nishikori showed no signs of fatigue, breaking for 2-1 in the opener.

The world number one retrieved it immediately, but the Japanese star, pouncing on the Djokovic second serve, took the crucial next break for 4-3.

The set was wrapped up in 39 minutes on an oddly subdued but sweltering Arthur Ashe Stadium when the top seed netted a service return.

Djokovic, however, shrugged off his lethargy, breaking in the fourth and sixth games on his way to levelling the semi-final with a sixth ace securing the second set.

Nishikori, threatening to wilt in the heat, had to save four break points in an 11-minute third game of the third set which went to seven deuces.

He then conjured up a break for 5-3, courtesy of a backhand pass and a stylish forehand return winner off a 120mph first serve.

But he cracked when trying to serve out the set, his second double fault handing the break straight back to the Serb.

As the on-court temperatures shot up, Nishikori went 4/0 and 5/2 in the tiebreak and claimed the set when Djokovic went limply wide with a weary forehand.

Nishikori then turned the screw, breaking for 1-0 in the fourth set and fending off three break points in the next for 2-0.

And that was almost that.

Down and nearly out, Djokovic was broken again in the ninth game when he sent a forehand long, a shot which rocketed Nishikori into the record books.