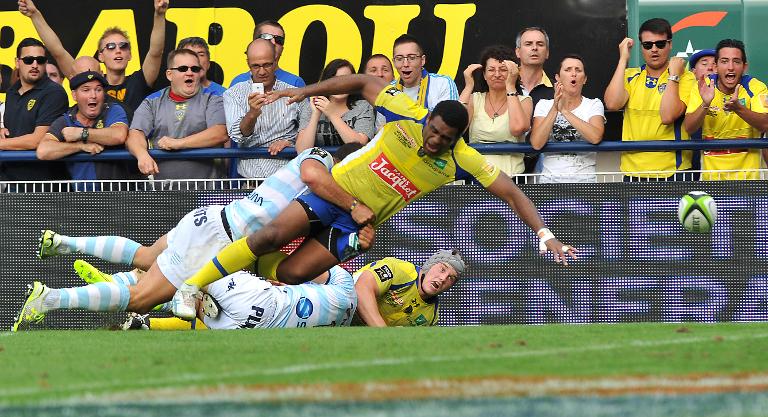 Clermont got back to winning ways at home following last week’s shock 21-20 reverse to Montpellier by cruising past Racing-Metro 32-6 in the French Top 14 on Saturday.

But four-time European champions Toulouse’s away woes show no sign of abating as they went down 26-19 to Brive, extending their winless away run to seven months.

Reigning French and European champions Toulon dropped to a point off the top as they stuttered to an 18-13 win over Bordeaux-Begles.

Clermont ran in four tries to take home the bonus point and join Montpellier, who thrashed 2013 champions Castres — for whom Johnnie Beattie was sent off after just 11 minutes — 43-10 on Friday night, at the top of the table.

South African fly-half Johan Goosen, who left the field injured before halftime, got things going with another monstrous drop goal from inside his own half — he had marked his debut for the club with a 50 yard drop goal against Montpellier.

And Goosen kicked Racing level at 6-6 with a penalty after two successful Morgan Parra goals, but the rest of the half was a Clermont demonstration.

South African-born English full-back Nick Abendanon picked up a poor Racing kick and ran through a disintegrating defence before feeding centre Rougerie to dive over on 28 minutes.

Five minutes before the break Georgia prop David Zirakashvili drove over from the back of a ruck after a break from Rougerie.

And on the stroke of halftime, flanker Alexandre Lapandry finished off a stunning move from inside Clermont’s 22, taking a pass from Fiji wing Napolioni Nalaga and charging home from halfway as Racing’s defence melted away again.

Within two minutes of the restart, the festival of tries continued thanks in large part to more inept Parisian defence.

Morgan Parra darted out from the back of a ruck on Clermont’s 22 and ran half the length of the field before popping the ball out to Rougerie, who beat Antonie Claassen far too easily on the outside before running in unopposed.

Racing were starring at an embarrassing thrashing but they tightened up enough to avoid conceding again.

The visitors actually led 10-3 at one point following Julien Rey’s 13th minute try but they couldn’t hold on and turned around 12-10 down at the break.

Earlier Brive outscored Toulouse by two tries to one with their kicker Gaetan Germain outdoing former England fly-half Toby Flood in their individual battle by 16 points to 14.

It was Toulouse’s second successive away defeat this season, having lost to newboys and relegation favourites La Rochelle last weekend.

Their last victory on the road was over hapless Biarritz, now in the second division, on February 15.

“We didn’t kill off the match when we had the opportunity,” said a disappointed Toulouse captain Thierry Dusautoir.

“This defeat following on from the one by La Rochelle leaves a sour taste and we need to rebound quickly.”

Brive had gone behind early on to a Flood penalty but took the lead in the 19th minute through centre Arnaud Mignardi’s try.

In other games, Stade Francais outscored Bayonne by five tries to two but only just scraped a 34-29 victory that earnt both sides a bonus point.

Grenoble took a bonus point in beating La Rochelle 30-12 while newly-promoted Lyon won their second match of the season in a tight 26-23 affair against Oyonnax.