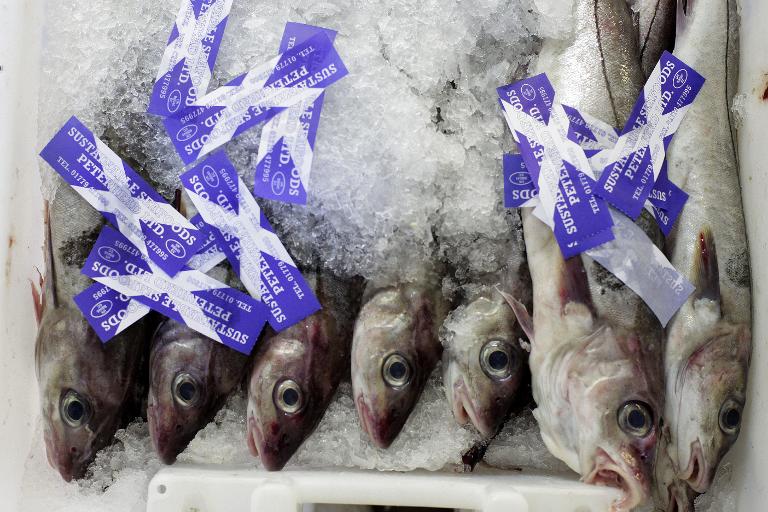 “One, two, two. One, three, four. One, three, six,” the auctioneer bellows in a rich Doric accent native to Aberdeenshire in northeast Scotland.

With each new price, his warm breath creates plumes of steam in the near freezing, cavernous hall that is Peterhead wholesale fish market.

Around him, buyers wearing clumpy yellow, orange or white boots tap dance across boxes of fish, holding the animals up to test their firmness and freshness and laying out rectangular strips of paper to mark their choice.

This is Europe’s biggest wholesale market for freshly-landed fish, where the looming Scottish independence referendum on September 18 is putting many traders on edge.

Within three hours, 6,000 boxes of North Sea white fish — mainly haddock, cod, monkfish or saithe — are packed off to markets, shops, restaurants or processing plants across the continent.

More than 130,000 tonnes of white fish, herring, mackerel and shellfish pass every year through Peterhead, 158 miles (254 kilometres) northeast of Edinburgh.

The town’s port authority is so confident about the future that it plans to build a bigger market hall to accommodate a higher volume of fish.

But there is a cloud on the horizon.

“We don’t know if there are going to be any barriers regarding red tape, if we have to pay any charges for fish going to England. We’ve been told nothing. Nothing at all,” says fish merchant Gary Mitchell, who exports 20 percent of his stock to France but sells all the remainder to clients in England.

“There’s a big difference in paperwork we have to do regarding filling out forms for France… There’s nothing like that at the moment for England. If that becomes a reality, there’ll be a huge amount more paperwork. So it’s a big upheaval,” Mitchell said.

The biggest challenge though will be the amount of fish that can be landed in the first place.

Fish quotas are decided in hard-fought negotiations within the European Union and, in the event of a “Yes” vote, no one knows what will happen to those quotas while Edinburgh negotiates its membership of the bloc.

The fishing industry, which is much bigger in Scotland than the rest of the United Kingdom, represents less than one percent of Britain’s GDP and the pro-independence Scottish National Party (SNP) says London has bartered away fishing rights for advantages in more lucrative economic sectors.

“At the moment, we have no control whatsoever over the activities of foreign vessels in our waters,” said Stewart Stevenson, SNP member of Scotland’s parliament for Banffshire and Buchan Coast, which includes Peterhead.

“As an independent nation, we can start to set the rules within the European framework. We would set rules that suit us,” he said.

It’s a message that resonates with a lot of fishermen, many of whom have been living off the sea for generations.

Peter Bruce, skipper of “The Budding Rose”, can trace his family’s sea-faring days back to when his great, great grandfather worked on the whaling ships.

“I used to have about six members of my immediate family in fishing. I’m the last one. Now everyone is in the oil industry,” Bruce said.

Strict quotas to protect dwindling fish stocks have forced many to look elsewhere for employment and the Peterhead fleet has fallen 75 percent from about 120 boats in the late 1990s to just 30 today.

Bruce said stocks have rebounded strongly in the past five years but the three-million-pound (3.8-million euro, $4.9 million) Budding Rose only fished for 60 days in the first eight months of 2014 as it had already hit quota limits.

He complains the EU is too slow to react to the evolving resources in the sea.

Bruce has decided to vote in favour of independence because it offers a glimmer of hope that things will get better.

“What I really hope for is that the fishing gets a lot higher profile.

“The last time there was a debate on fishing in the House of Commons and there were about 12 people there. It just shows the interest of fishing,” he said.

But the head of the Scottish Fishermen’s Federation Bertie Armstrong warned an independent Scottish nation will not have the same powerful voice in Europe and fishermen will suffer in the short term.

Scotland with its 5.3 million people would have a long way to go to match the voting power of the United Kingdom and its 63.2-million-strong population.

In the complex system of EU fishing quotas, boats can also swap the fish they catch with vessels from other nations.

If a Scottish boat nets too much monkfish, it can swap it for cod caught by a vessel from France where monkfish is more popular while still meeting quotas.

Within Britain, Scottish boats can also for example buy or lease quotas from other boats from England or Wales as long as they remain in the overall UK quota.

“What happens when that system stops?” Armstrong said, pointing out that Scotland’s mixed fishermen currently catch 20 to 30 percent more than they’re nominally allowed by buying or leasing quotas.

“Although you might feel better as a small country and negotiating for yourself, if you want to have more impact that a gnat on a windscreen, you need to be a heavier hitter.”