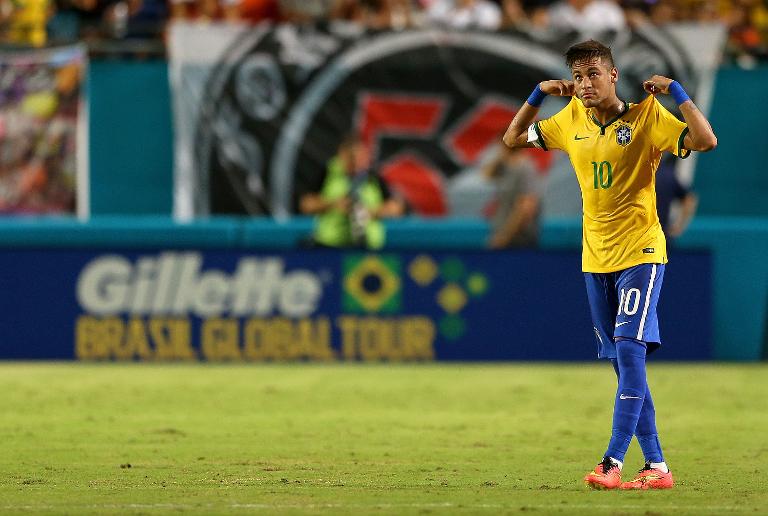 With Neymar back in their ranks and scoring the only goal, Brazil gave Dunga a winning start in his second spell in charge — although a 1-0 friendly success over Colombia left media unimpressed.

Fielding seven of the side whipped 7-1 by Germany in their World Cup semi-final almost two months ago, Dunga could point to a win and a clean sheet as positives to take from Friday’s encounter in Miami, but observers back home were critical.

There was “little samba or salsa,” with the match only remarkable for “the same old song– the talent of Neymar,” complained sports daily Lance.

Rio daily O Dia was even blunter in its assessment after a win over opponents reduced to ten men following a red card for Juan Cuadrado just after the interval for fouling, inevitably, Neymar.

“Brazil remain the same — they only have Neymar,” grumbled the paper, though it could not fault the team’s effort and pinpointed some periods of “good football.”

“Little has changed — (they) suffered” to drag out the win.

“Starting a new era under Dunga (sacked after a World Cup quarter-final loss against Holland in 2010 before replacing Luiz Felipe Scolari six weeks ago) there were few on-field improvements as Brazil’s game plan still lacks alternatives” to Neymar, Globo complained.

Neymar’s absence through injury against Germany derailed the side not just in terms of creativity but also psychologically, the hosts falling apart in that game as they suffered their worst ever World Cup loss.

Neymar’s strike from a late freekick at least ensured the Selecao pushed their horror show against the Germans a little deeper into the distant memory file to edge out opponents whom they had also beaten in the World Cup quarter-finals.

“The Selecao is not just one player,” Neymar noted afterwards, though he added: “The important thing was to win.”

Having taken the captain’s armband on his return he added: “I am very happy the coach has this confidence in me” to lead the squad.

“But everyone has to remember this is a group.”

Tasked with overhauling the five-times world champions, Dunga picked just 10 of the 23-man squad which ultimately disappointed at a home World Cup.

He said the result was secondary to the performance, which he judged satisfactory.

“We came out of the Cup a little bruised and had to respond.

“There were a lot of positives.”

Neymar returned having made a full recovery from the back injury he sustained in July’s victory over the Colombians, during which he was kneed in the back by Juan Camilo Zuniga.

The pair embraced before Friday’s game as Neymar showed there were no hard feelings.

The Barcelona star will also captain Brazil when they face Ecuador in a second friendly on Tuesday in New Jersey.

After facing Ecuador, the Brazilians will meet World Cup finalists Argentina in November as Dunga, who as a player lifted the 1994 World Cup, chases a winning blend for next year’s Copa America championship.

Defender David Luiz insisted afterwards that the team had learned lessons from the World Cup and was now ready to get to grips with “a new cycle.”