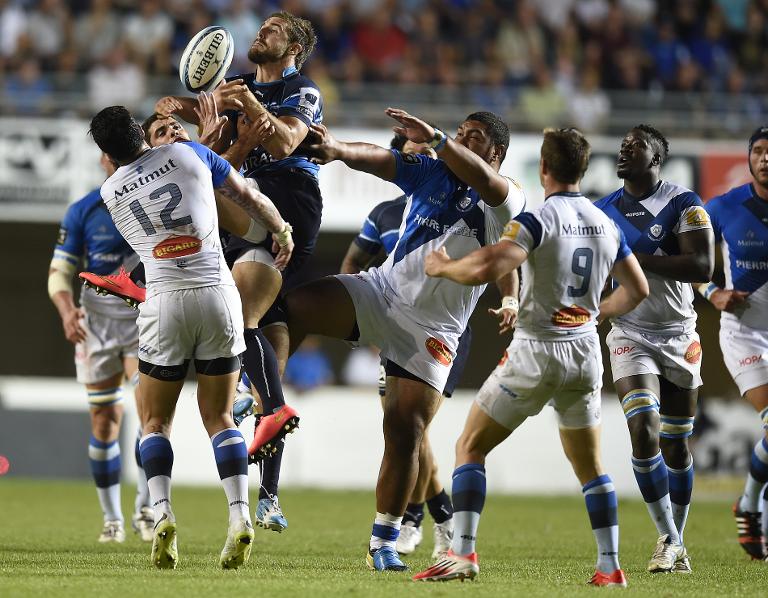 Castres, the 2013 champions and last season’s beaten finalists, shot themselves in the foot through the first half sending off of Scotland No.8 Johnnie Beattie — who transferred from Montpellier in the off season — and a yellow card shown to English wing Marcel Garvey.

Those indiscretions helped Montpellier end a five-match losing streak against their opponents, who have also knocked them out of the play-offs the last three years in a row, as they ran in six tries to one.

Yet even by the time of Beattie’s 11th minute red card, Montpellier were well on their way to ending that losing streak.

A clever miss-pass from No.10 Francois Trinh-Duc and quick hands from Mowen helped flanker Kelian Galletier charge over in the corner after five minutes.

That gave Montpellier an 8-0 lead after Trinh-Duc’s early penalty.

Beattie was sent off for a crude shoulder charge into Timoci Nagusa’s jaw, forcing the Fiji wing to be replaced by Pierre Berard.

After that Montpellier turned the screw in the pack and quickly added two more tries.

No.8 Mowen picked up from the back of a five-yard scrum and barged his way over on 12 minutes.

Trinh-Duc kicked the extras and although Castres’ South African scrum-half Rory Kockott knocked over a penalty, it was a moment of rare respite.

A simple catch and drive move from a line-out saw Australian lock Sitaleki Timani touch down under a pile of bodies on 31 minutes.

Overpowered up front, Castres didn’t help their cause on 36 minutes as they lost the ball at the breakdown and a flicked pass from Trinh-Duc sent scrum-half Jonathan Pelissie scampering over in the corner.

Things got worse for the visitors just before half-time as Garvey took out Berard in the air and was promptly sin-binned, leaving Castres to start the second period down to 13 men and trailing 29-3.

Incredibly, though, it was Castres who worked an overlap on the right to send full-back Julien Dumora into the end zone for the next try of the match moments before Garvey made his re-entrance.

The 14 men then almost scored a second try as Dumora touched down a spilled ball after New Zealander fly-half Daniel Kirkpatrick tried to gather Kockott’s chip over the defence, but the TMO adjudged the outside half to have knocked on.

Montpellier were playing like a team that had left their spirit in the changing rooms at half-time but finally they got back to doing what worked in the first period and they were awarded a penalty try as the forwards rumbled towards the line only for Castres to collapse the maul.

Having missed the first, Trinh-Duc landed his fourth conversion out of five for a 36-10 lead.

Castres tired towards the end and Montpellier took advantage after a quickly-taken penalty as Trinh-Duc’s clever reserve pass sent South African Robert Ebersohn under the posts.