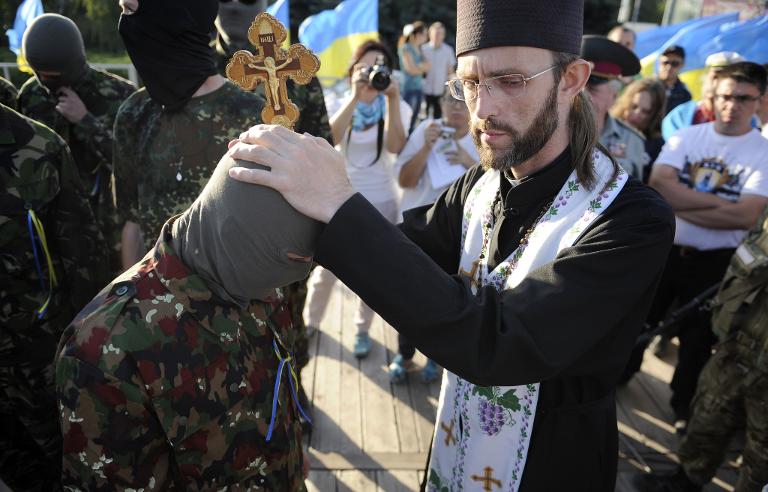 In flashpoint cities of eastern Ukraine, uneasy residents voiced doubt Saturday that the ceasefire deal would bring lasting peace after five months of devastating conflict that has ruined the lives of so many.

“It’s only a matter of time (before the truce is broken) because our Russian ‘brothers’ won’t stop until they finish their dirty work,” Alexei Maximov, a metal factory worker in the strategic port city of Mariupol, said acidly.

Supporters of both the Ukrainian forces and the pro-Moscow insurgents who have been at war across the industrial east since mid-April also remained on edge despite the calm generally prevailing.

Both the Ukrainian military and rebel leaders accused the other of breaking the ceasefire soon after it took effect on Friday at 1500 GMT.

“Nothing has actually changed,” 38-year-old Russian Vladyslav Lobzin told AFP in Mariupol, where residents had been bracing for a rebel onslaught until the guns were ordered silent.

“Even Kuchma said the battle will continue. Nothing is going to be stopped,” he said, referring to former Ukrainian president Leonid Kuchma, Kiev’s representative at Friday’s ceasefire talks in Minsk.

Rebels had moved to within kilometres of Mariupol over recent days in a lightning counter-offensive south of the main rebel-held city of Donetsk that was seen as a land grab to carve out a corridor between Russia and the annexed Crimean peninsula.

Denis Gavrilov, who organises civilian defence courses in Mariupol, said many people did not have faith in the deal.

“We already had a ceasefire in June. The result was 57 killed. That’s not the sort of truce we want.”

The West accused Russia of sending in troops and heavy weapons to back the new push by the rebels, who until last week had been losing ground to Kiev’s forces in the east.

Natalia, a 54-year-old professor staying with friends in Mariupol after fleeing Donetsk, said she would never return to the city while it remained in insurgent hands.

“It’s impossible to trust them (the rebels), they are bandits,” she said. “(Ukrainian forces) can only fight them and push them back. There is no other way.”

Donetsk was besieged by Ukrainian forces for weeks, depriving the city of essential supplies and sending thousands of people fleeing, until the troops moved away in the face of a sudden rebel counteroffensive across the southeast.

“I hope that the truce will last. If you had lived in my apartment during all these bombardments, you would understand how happy I am that there is a ceasefire,” said Donetsk resident Vasyl.

He said he would be celebrating his 50th birthday on Sunday “if I’m still alive”.

According to an AFP toll compiled from UN and government figures, the fighting has killed nearly 2,800 people since mid-April and forced at least half a million from their homes.

Dozens of towns now stand in ruins and once-powerful factories and coal mines that form the backbone of Ukraine’s economy have ground to a halt.

Ali, 24, a medical student from Iraq, said he returned to Donetsk on Friday after hearing that “everything was back to normal”.

“I like Donetsk and I want to continue to live here and continue my studies. They have promised that classes will resume in October.”

But in the town of Yasynuvata, a rail hub around 30 kilometres (20 miles) north of Donetsk, residents who have spent weeks sheltering from the bombardments in a college basement were pessimistic.

“How can we live like this? How can we even think the Ukrainian army is liberating us?” said a middle-aged woman named Tatyana.

“What is this freedom? Houses are destroyed, we have nowhere to go, nowhere to live.”

And a pro-Russian fighter manning a checkpoint just outside Yasynuvata said the conflict would not end until the separatists had achieved their goals.

“Once we’d got to Mariupol we should have taken Mariupol. This is not really a ceasefire. It’s a tactic by (Ukrainian President Petro) Poroshenko and his supporters to regroup.”