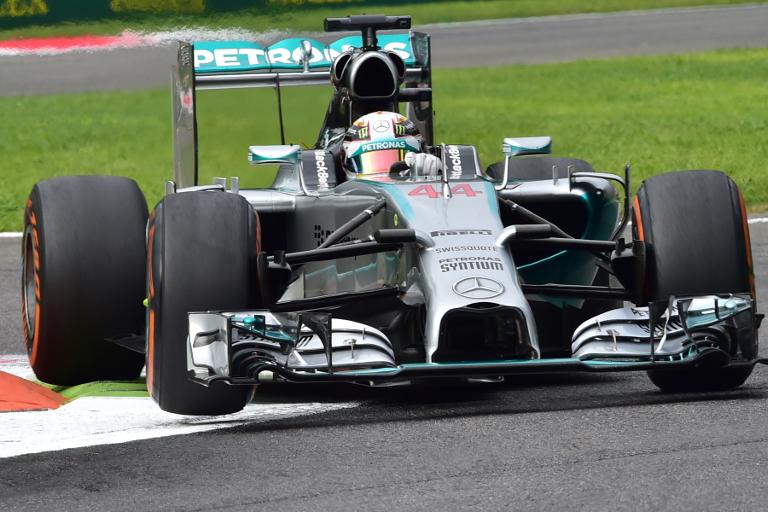 Lewis Hamilton swatted aside the electronic gremlins that ate an hour out of his time on Friday after winding up a close second behind his Mercedes team-mate Nico Rosberg in second free practice for Sunday’s Italian Grand Prix.

On a tense day at the Autodromo Nazionale di Monza, and only 24 hours after Mercedes had attempted to regain control of their title-duelling drivers, Rosberg clocked the fastest time, but Hamilton overcame another afternoon of frustration to bounce back within 0.061 seconds of the German’s best time.

For Mercedes, it was as pleasing to see their warring partnership avoid collisions or incidents as it was to see them top the times two weekends after their acrimonious accident on the second lap of the Belgian Grand Prix.

That crash deprived Hamilton of a chance to win and forced him into retirement with a puncture while Rosberg completed the race to open up a 29-point lead in the championship.

Rosberg later apologised for causing the puncture and took responsibility for his actions, for which the team had punished him.

If Hamilton had hoped this would signal an end to his setbacks in this roller-coaster season, he was wrong.

On Friday afternoon, as Rosberg went out to top the times with a lap in one minute and 26.225 seconds, his best from 41 laps in 90 minutes, Hamilton managed only 16 in the final half hour.

The Briton, however, did end up with the best time of the day overall as his fastest lap in morning practice topped the best from Rosberg in the afternoon.

“It is always difficult, but to be honest, I am quite relaxed about it because it is not the first time I have been in this situation and I feel I am well equipped to be able to cope with it,” Hamilton told reporters.

“The guys normally get the car working and I think we will get ourselves in the right place. I will try and understand what Nico learnt from his session and see if I can learn from that too.

“Generally, we have quite a similar driving style. There are a couple of differences, but generally, if you see the overlays, they are very similar.”

Rosberg was pragmatic even if appeared that Mercedesâ€™ superiority had been diminished.

“It has been a good day, but the others do seem to be a little bit closer. So definitely we need to make sure we work hard tonight and optimize everything. Our car seems to be a bit better on one lap than on the long runs, so it is long runs that we need to work on.”

Hamilton was still mystified after the team had changed the engine ignition sensors.

“I don’t know what the problem was. The car just wouldn’t start. They tried it lots of times to start it and she wasn’t happy.

“I have not had a good qualifying for eight or seven races now, whatever it is, so I hope we can rectify that this weekend.”

As for the championship, in which he trails by 29 points with seven races remaining, he said: “Nico and I haven’t spoken about the fact that, in terms of the championship, he can afford a collision and I can’t.

“But, to be honest, it has been the same all year, ever since I retired from the first race and he won it. He had a cushion. I had to pull it back. Then he got another, and I pulled it back.

“Now I’ve got to do it again. Sure, he can go into this weekend a lot more relaxed in the sense that he can afford a non-finish and I can’t really. But there is only so much I can control.”

Finn Kimi Raikkonen was one-tenth of a second down in third place in the leading Ferrari ahead of his Spanish team-mate Fernando Alonso as the ‘scarlet scuderia’ enjoyed their traditional Friday form at the old Autodromo.

Fast-improving Finn Valtteri Bottas was fifth for Williams ahead of Briton Jenson Button in his McLaren with defending four-time champion German Sebastian Vettel showing improved form for Red Bull back at the circuit where he gained his maiden victory in 2008.

Dane Kevin Magnussen was eighth in the second McLaren ahead of Brazilian Felipe Massa in the second Williams with Australian Daniel Ricciardo, in the second Red Bull, taking 10th place in a session of improving times on a warm, if overcast afternoon.