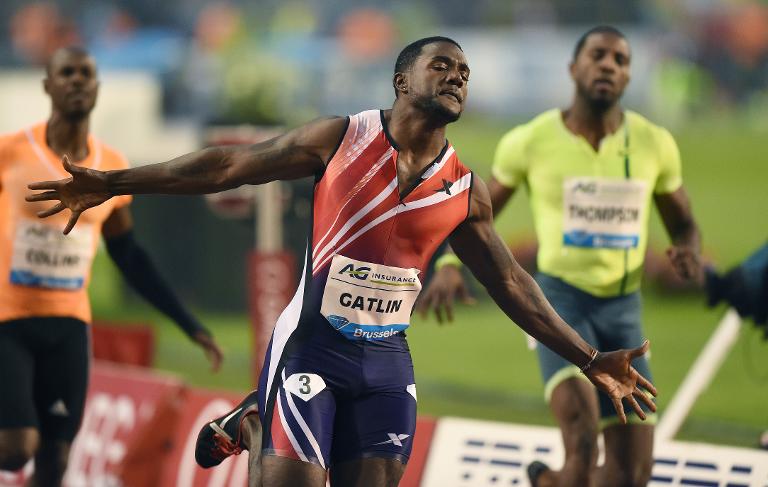 American Justin Gatlin rolled back all of his 32 years to record a fast 100-200m sprint double at the final Diamond League meeting of the season on Friday.

In an electric night of top-notch track and field in perfect, sultry conditions at the King Baudouin Stadium, Qatar’s Mutaz Essa Barshim then won a nail-biting high jump with the second highest effort of all-time, 2.43 metres.

But it was Gatlin who will grab the headlines, the veteran who won 100m gold in the 2004 Olympics and the double world sprint titles a year later before serving a 2006-10 doping ban producing two amazing races in the space of one hour.

He first raced the 100m, winning in a season’s fastest time of 9.77sec, which matched his world record-equalling mark set in Qatar in 2006 — later rescinded because of his doping infraction.

Gatlin then returned to the track and blasted to an incredible victory in the 200m in 19.71sec, just 0.03 slower than his own world leading time.

“I needed favourable conditions and we got them,” said Gatlin. “It’s the most perfect night I’ve had all year, a very special night for me and my family.”

“To be able to run in the 100 and 200m almost an hour apart or less… I wanted to test my toughness, to see what I can do under pressure.”

Gatlin admitted that his time in the 100m was slightly ironic.

“I want to go out and run until I can’t run anymore. They should bottle me up and put me on the wine shelves.”

In the field, Barshim pipped Ukraine’s reigning world champion Bohdan Bondarenko in the high jump, with both going for what would have been a world record 2.46m in front of a raucous capacity 46,000-strong crowd on their feet.

“Of course it’s possible to beat the record because it was set by a human. I just dont know when!” said the 23-year-old Barshim of Cuban Javier Sotomayor’s world record of 2.45m which dates back to 1993.

Mekhissi had vowed pre-race that he was ready to become the first athlete to “break the hegemony” enjoyed by Kenya in the gruelling event.

But despite being dragged along on the pacemakers’ coattails, the Reims-born athlete could not get the better of Birech, the sole in the field to dip below the mythical 8-minute mark with 7:58.41.

Gatlin’s teammate Allyson Felix claimed a memorable victory in her favoured 200m, also in a world leading time of 22.02sec ahead of France’s Myriam Soumare (22.11).

“It’s been a tough season and I was really focused on this meet,” said Felix, who insisted she still had things to win despite her six Olympic and 10 world medal haul.

I still love this sport, I’m so passionate about it I’ll go after it.

Untouchable New Zealander Valerie Adams, two-time Olympic and four-time world champion, stretched her unbeaten streak in the shot put to 56 victories with a season’s best and meet record of 20.59m, becoming the only athlete to win all seven Diamond League events in the process.

Czech Republic’s Olympic and European champion Barbora Spotakova followed in Adams’ footsteps by topping the javelin podium with a meet and season’s best of 67.99m.

Olympic champion Taoufik Makhloufi of Algeria, in 3:31.78, claimed a photo-finish win over Silas Kiplagat in a loaded men’s 1500m, the Kenyan however claiming the Diamond Race for the event.

And late on, France’s Renaud Lavillenie recorded a straightforward victory in the men’s pole vault with a world leading 5.93m.

The result, however, left the Olympic and European champion, and world record holder with 6.16m, still seeking to break the 6m-mark this season.