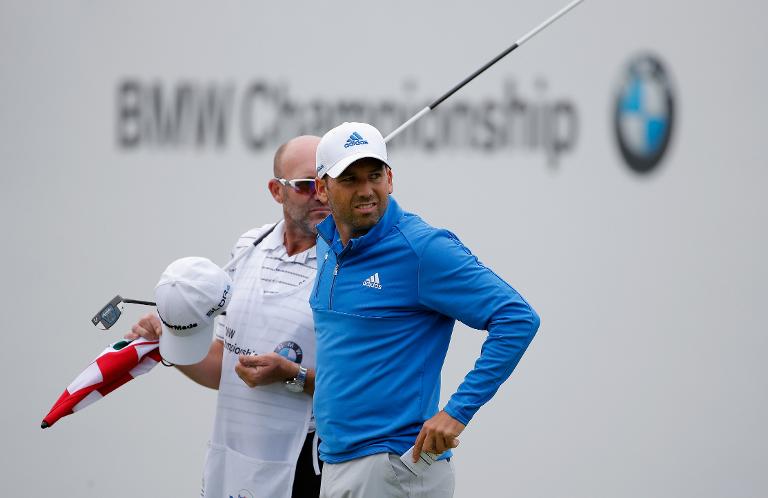 Sergio Garcia, who had a string of three consecutive runner-up finishes earlier this year, is in position to try and post his first victory on the USPGA Tour in two years.

Garcia fired a second round six-under 64 Friday to vault into the lead at the $8 million BMW Championship at Cherry Hills Country Club.

The Spaniard finished 36 holes at eight-under 132 and he holds a one-stroke lead over American Ryan Palmer.

“The course is in great shape,” Garcia said. “It’s a shame that it rained yesterday. It would have played really, really tough throughout the week, but it’s still playing great.”

Garcia won earlier this year at the Qatar Masters on the European Tour but he has not hoisted a trophy in North America since the 2012 Wyndham Championship.

Garcia hasn’t been able to break through this year despite being in the hunt several times. He finished tied for second at the Travelers Championship and the Open Championship. Garcia was also the runner-up at the WGC-Bridgestone Invitational.

He skipped last week’s Deutsche Bank Championship and the move seems to be paying off.

After some overnight rain, the Cherry Hills course softened and Garcia was able to try and take advantage of that during the second round.

Garcia helped his cause with a couple of hole outs Friday. On the second hole, his second shot from 93 yards out found a bunker to the right of the green. Garcia hit the ball from the sand and drained the shot from about 46 feet for a birdie.

Another brilliant shot came at the par-four seventh. After his drive landed just off the fairway, Garcia’s approach shot from 126 yards dropped into the hole for an eagle. That put him at three-under on the day.

“I guess I had a couple of bonuses out there,” said Garcia.

Palmer shot a 64 on Friday to jump into sole possession of second place at seven-under 133. He is looking for his fourth win on the USPGA Tour.

World number one Rory McIlroy carded his second consecutive 67 and he is tied with Billy Horschel (66) at six-under 134. McIlroy had a share of the first round lead with Jordan Spieth and Gary Woodland.

McIlroy had a strong finish Friday after making bogey on two of his final three holes in round one.

“I feel much better coming off the golf course because I birdied three of the last four holes,” McIlroy said. “I felt like I was giving myself a lot of birdie chances. There was thick rough around the greens so if you miss it then it is tough to get up and down.”

McIlroy, who is currently number two in the FedEx Cup playoff standings, beat out Garcia for the Open and WGC-Bridgestone Invitational titles this season.

“It was a little trickier conditions today,” McIlroy said. “It was cooler so the ball wasn’t going quite as far. Even though the course was softer it still played tough out there.”

Chris Kirk (70), the Deutsche Bank Championship winner, is nine shots back at one-over 141. The Barclays tournament winner Hunter Mahan (70) is well back at five-over 145.