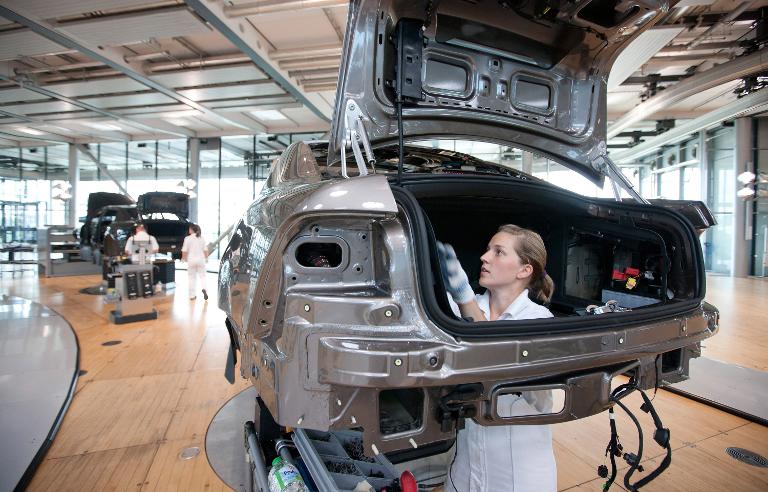 The cloud over the German economy, Europe’s biggest, appeared to lift somewhat on Friday with data showing a strong rise in industrial production in July.

According to economy ministry data, industrial output increased by 1.9 percent in July, after already rising by 0.4 percent in June.

Slowing overall growth in Germany is one of many factors weighing on the outlook for the eurozone which pushed the European Central Bank into announcing surprise action on Thursday to inject cash into the economy.

Following a surprise rise in factory orders on Thursday, the latest data could help dispel some of the gloom hanging over the German economy recently, analysts said.

“It was the strongest rise since March 2012,” said UniCredit economist Andreas Rees.

“Furthermore, industrial activity was up for the second consecutive month after the whopping decline in May,” he said.

The German economy contracted by 0.2 percent in the second quarter.

While the data provided “further evidence that the eurozone’s largest economy should return to growth in the third quarter … not everything is hunky dory, yet, and one good month does not make a strong quarter,” the expert said.

In particular, increased uncertainty from geopolitical risks should not be underestimated, Brzeski warned.

Commerzbank economist Ralph Solveen said that “like yesterday’s significant growth in incoming orders this is not a signal of an improvement in the economy.”

He attributed the rise to the unusually late timing of the school holidays, which resulted in a much smaller number of days off than usual in July.

“A strong countermovement can therefore be expected in August, and as a result the German economy is still expected to show only weak growth in the third quarter,” Solveen said.

The July orders data were inflated by bulk orders.

“The strong start in the third quarter limits further downside risks, but the short-term outlook for Germany’s industry is overshadowed by the Ukraine risk,” he said.

Once that faded, however, the renewed strength of the US recovery and resilient growth in China, paired with the latest decline in the euro exchange rate pointed to a brighter outlook, he said.

“By the end of the year or in early 2015, German growth should have recovered towards trend rates again,” Schulz concluded.