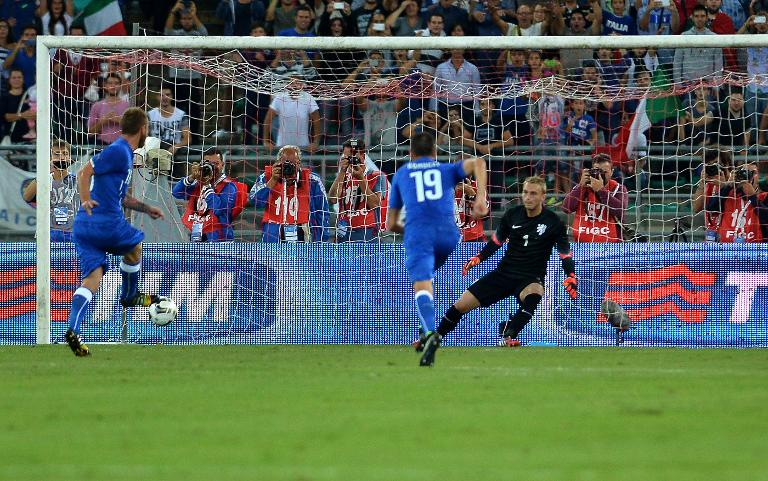 Two goals in the first 10 minutes were enough to see Italy to a 2-0 friendly victory over World Cup semi-finalists the Netherlands and launch their new era under coach Antonio Conte in style.

Playing Conte’s trademark 3-5-2 formation, the Italians came out on the front foot and were ahead after just three minutes when new Borussia Dortmund signing Ciro Immobile found the net after a long pass from Leonardo Bonucci.

Captain Daniele De Rossi doubled their advantage in the 10th minute after newcomer Simone Zaza was fouled in the area by Bruno Martins Indi, who received his marching orders.

De Rossi made no mistake from the spot.

“It’s always good to begin with a win,” said Conte.

“In six training sessions the boys have understood the style of play and executed it..a manager can have a thousand ideas but it’s the players who can make or break the fortunes of a coach.”

His Dutch counterpart, Guus Hiddink, who has replaced Manchester United’s new boss Louis van Gaal, reflected: “After 10 minutes the match was over.

“After the sending off the aim was not to let in any more goals, but we lost to a very good side.

“We won’t panic, we have to remain concentrated, there are negatives from this match, but also positives.”

Zaza should have marked his debut with a goal 10 minutes later when he was allowed to go through alone on goal after a high-speed counter-attack led by Immobile, but made a mess of his final touch.

Against a surprisingly tame 10-man Dutch side, the two new front men combined well and the mercurial Mario Balotelli will have his work cut out to convince Conte to change the winning line-up.

Italy open their Euro 2016 campaign with a relatively easy trip to Oslo to take on Norway.