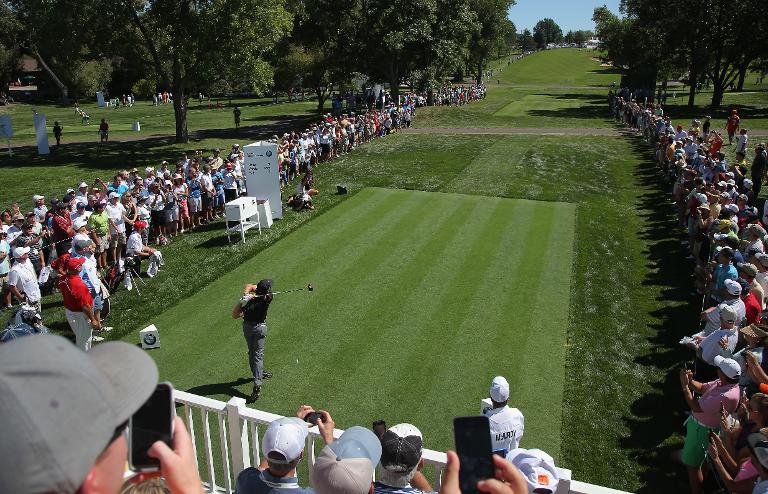 Top-ranked Rory McIlroy is among the leaders while Japan’s Hideki Matsuyama is on the bubble as the US PGA Tour season-ending playoffs reach a decisive moment at the BMW Championship.

The penultimate event of the campaign tees off Thursday at the 7,352-yard, par-70 Cherry Hills Country Club layout with only 30 from a field of 69 advancing to next week’s Tour Championship in Atlanta.

McIlroy, who won the PGA Championship last month and the British Open in July, ranks second in the season points race to American Chris Kirk, who won last week’s event in Boston.

Kirk, passed over for a Ryder Cup spot by US captain Tom Watson when making his wildcard choices Tuesday, played alongside McIlroy over the last two rounds last week and will join him for the first two rounds this week alongside Hunter Mahan, a US Ryder Cup wildcard pick who won the playoff opener, The Barclays, two weeks ago.

“I’ve known Rory for a good many years and always had a good relationship with him,” Kirk said. “He’s a very enjoyable guy to play with.”

Kirk was not upset about the Ryder Cup snub, having already made plans to attend a collegiate American football match that weekend.

The top nine players in points — who also include Australian Jason Day and Americans Jimmy Walker, Matt Kuchar, Bubba Watson, Jim Furyk and Jordan Spieth — have already clinched berths in Atlanta, but they will be trying to crack the top five after this week.

Anyone in the top five in points entering the Tour Championship can win the season playoff crown simply by winning the tournament. Players outside the top five who win would still need certain finishes by those above them to claim the playoff title.

And anyone in the field could jump into the top five in points by winning this week. Only Kirk has clinched a top-five spot, although McIlroy and Mahan would be difficult to unseat as well.

Among those likely to hold onto their top-30 spots this week are Aussies Adam Scott and Geoff Ogilvy, the latter who rose from 100th, the final Boston spot, to 24th in points by sharing second last week.

“I guess that’s the beauty of these things,” Ogilvy said. “I was coming in a long way down the list. But you’re one week away from getting all the way to Atlanta and having a chance to win the whole thing, which is nice.”

Matsuyama ranks 30th in points this week, holding the final ticket to Atlanta.

McDowell skipped last week’s event to be with his wife and new baby daughter Vale.

“Not sleeping much, changing lot of nappies,” said McDowell, who will need a top-four showing to reach Atlanta, having fallen to 53rd by skipping last week

Mickelson returns to the site of his 1990 US Amateur victory. He seeks an eighth consecutive trip to the Tour Championship but ranks 56th in points.

“I have a picture of every hole painted in my mind from 24 years ago,” Mickelson said. “I’m so excited.”