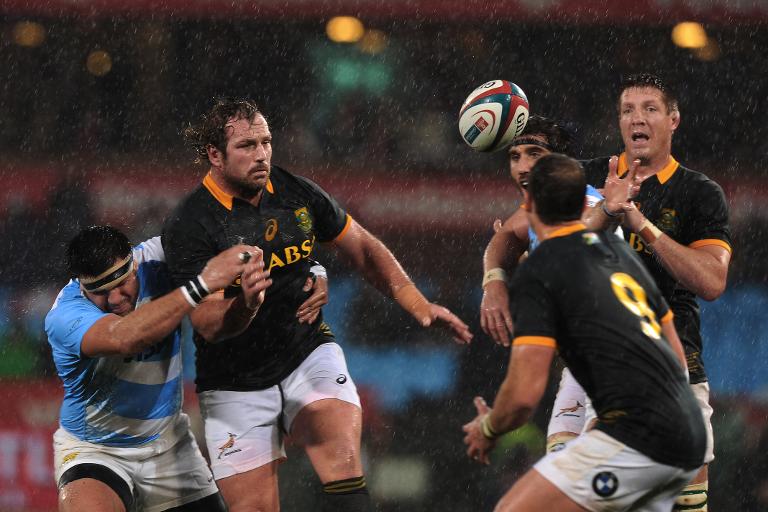 South Africa are gearing up for a physical forwards battle as they look to protect their lead in the Rugby Championship and inflict more pain on Australia in Perth on Saturday.

The Springboks are coming off two tight wins over Argentina to remain unbeaten in their last eight games, while Australia’s tournament hopes were derailed by a 51-20 pummelling from the All Blacks in New Zealand.

The Springboks minced the Wallabies four tries to nil in a dominant 38-12 victory on their last visit to Australia a year ago and have enjoyed three wins and a draw in their previous seven matches in Perth.

While Australia coach Ewen McKenzie has showed faith in the pack that was crushed by the All Blacks a fortnight ago, Meyer is not buying into talk that the Wallabies forwards are a pushover.

“I don’t believe that,” he said. “We (South African teams) played 10 games here in Super Rugby (this year) and I think we won one. You don’t lose nine games against guys who aren’t physical enough and don’t get into the confrontation.

“They have a good scrum, they’re physical on defence. I have a lot of respect for a guy like Michael Hooper, he’s a captain and he leads from the front. It’s always physical playing against Australia.”

The Australians will be hellbent on bouncing back from their Auckland ignominy after holding the mighty All Blacks to a try-less 12-12 draw in Sydney to kick off the Rugby Championship series.

McKenzie has ditched his halves combination of Kurtley Beale and Nic White for the NSW Waratahs Super Rugby champion pair of Bernard Foley and Nick Phipps, and brought back former skipper and lock James Horwill onto the reserves bench.

“South Africans do play a unique brand of rugby which we will need to adjust to,” McKenzie said.

“That’s reflected in our selections, where we feel the partnership of Nick and Bernard will best suit the style of game we’ll be trying to play.

“Traditionally they are a forward-orientated side which uses their size, power and set-piece to put pressure on the opposition,” he added.

“You have to confront that head-on and match fire with fire. The addition of an extra forward (on the bench) also offers us greater flexibility in how we approach our substitutions.”

By recalling Matfield the Springboks are expected to dominate the line-outs, where the Australians have been suspect, while sharpshooter Steyn, who has 670 points in 58 Tests, can punish them with his goalkicking.

But if the Wallabies can get any sort of parity in the forwards and front-foot ball they have the backs to trouble the Springbok defence.

“Australia’s got an unbelievable, an exceptional backline,” Meyer said. “It’s a brilliant backline. I truly believe that. They’re big, they’re quick and they’re in form.

“Look at the pairing on the bench as well, both players (Beale and White) are world class.”

It’s something the Wallabies are hoping will swing this match after the savage mauling by the All Blacks left them at the bottom of the four-nation series.

“We’ve effectively ended up with NSW halves, a Brumbies midfield, and NSW outside backs,” McKenzie said.

“So there’s something there, but that’s just the way it’s unfolded — we deal with everyone separately.”

Another defeat, this time at home, will end any lingering hopes the Wallabies have for mounting a challenge for the title.

But a win for the Springboks will put them in good heart for their impending showdown with New Zealand in Wellington on September 13.

Saturday’s match will also be winger Bryan Habana’s 100th for the Springboks, only the fourth South African to reach the milestone after Percy Montgomery, John Smit and Matfield.