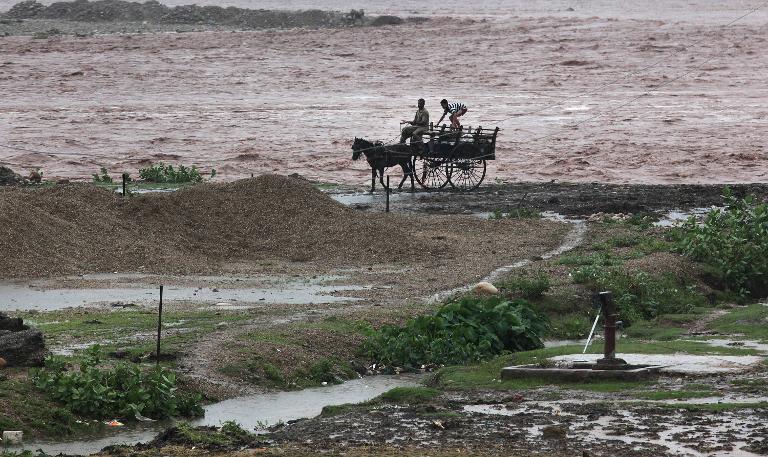 Flood waters swept an overcrowded bus carrying a wedding party into a gorge on Thursday with all but six of the 50 on board feared dead in Indian Kashmir, officials said.

Rescue teams have been deployed to the flooded gorge south of Kashmir’s main city of Srinagar but they have so far been unable to reach the bus, police said.

“Six passengers managed to swim to safety and they were rescued from the gorge,” director general of police, Rajendra Kumar told AFP.

Heavy rains that have hit the region in the last 24 hours and strong gushing waters in the deep gorge have hampered attempts to search for any survivors, police said.

“We are using everything at our disposal in the rescue effort, and a crane is in place for pulling the bus out of the river,” Kumar said declining to confirm the number of dead.

A column of army were also drawn into the rescue effort as fresh landslides in the area made access to the accident site difficult.

Flooding has hit hundreds of villages across the picturesque Kashmir Valley in the country’s north, leaving at least 16 people dead, and forcing the closure of schools and some roads, authorities said.

The bride and groom were among those travelling on the bus when the accident happened, according to the Press Trust of India, although this could not be confirmed.

The passengers were heading to a wedding in the Rajouri district, 350 kilometres (220 miles) south of Srinagar, state government official Shantmanu, who uses only one name, said.

“Witnesses said 50 to 60 people were in the bus when it fell into a gorge after it was swept away by flood waters,” divisional commissioner Shantmanu told AFP.

Authorities called the flooding the worst in several decades and advised tens of thousands living along the banks of the state’s Jhelum river and other major waterways to leave their houses and move to safer places.

Most waterways were at risk of flooding, their waters flowing above what authorities called the danger mark.

Twelve people, including two soldiers, have been killed in flood-related incidents in mountainous areas of Kashmir’s south since Wednesday night, Shantmanu said.

Amid the ongoing risk of landslides, authorities closed schools for a second day along with the only road linking the Kashmir Valley with the Indian plains.

The region’s wedding season which normally starts in September has also been disrupted, with the weather forcing many ceremonies to be postponed.

Divisional commissioner Kansal said heavy rains were forecast to continue for another 24 hours and authorities were evacuating a number of people to safer areas.

The inclement weather has also halted all flights from Srinagar airport bound for the annual Hajj pilgrimage in Mecca for the next three days.

“It is difficult for the Haj pilgrims from various districts to reach to Srinagar due to incessant rain and flash floods,” a government statement said Thursday.