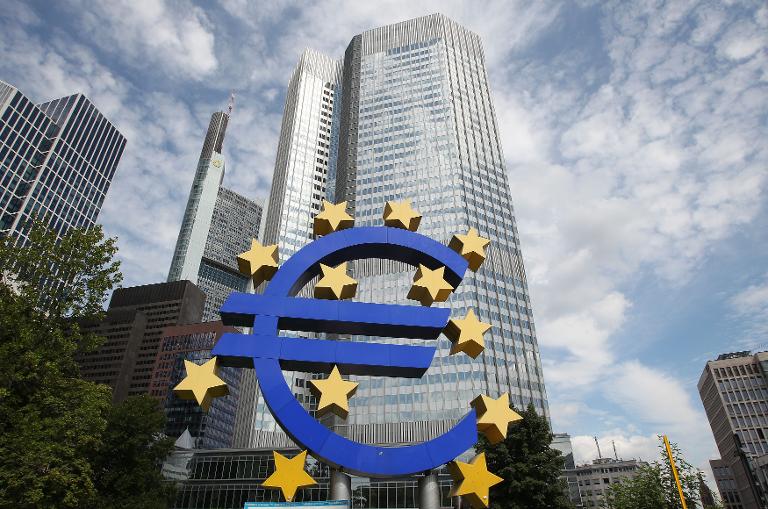 The European Central Bank will be in the full spotlight of financial markets on Thursday when it meets to decide if and how to strike against deflation stalking the 18-member eurozone.

With economic recovery flagging badly and inflation falling ever deeper into a danger zone, the big decision for the bank is whether to spell out if and when it will open its cash floodgates.

Many economists believe it will do so by means of what is known as “quantitative easing” or “QE”, but that it will probably not put such a programme into effect immediately.

QE is a radical policy — already used by other central banks such as the US Federal Reserve — of buying securities on a big scale to inject cash into the economy.

The ECB has already cut its key interest rates to record lows and made huge volumes of ultra-cheap cash available to banks in a bid to kick-start lending in the single currency area.

But the pressure has increased on the ECB to take still more measures after eurozone inflation slowed to just 0.3 percent in August from 0.4 percent the previous month.

The latest data puts inflation worryingly below the central bank’s target of just under 2.0 percent and brings the single currency area perilously close to deflation.

This is a climate of falling prices which can cause businesses and consumers to delay purchases, further reducing demand and prices and pushing up unemployment.

Nevertheless, no such concrete action was likely just yet, he cautioned.

“The ECB is unlikely to divulge any amounts or details of what will be bought and will probably postpone the decision on whether it will actually activate such a programme,” Schulz said.

Analysts said they were now convinced that the ECB was planning QE, after Draghi said recently that the bank was becoming concerned about falling inflation expectations.

The supreme statutory duty of the ECB is to ensure price stability.

The idea behind QE would be that a big flow of fresh cash would help raise bank lending, investment, consumption, employment and therefore prices.

The ECB as “ready to adjust (its) policy stance further” and “will use all available instruments needed to ensure price stability over the medium term”, Draghi said.

There is resistance to QE, however, if it entails the ECB buying up sovereign bonds because many critics — including the German central bank or Bundesbank — view that as monetary financing, or printing money to pay a country’s debt, which the ECB is expressly forbidden from doing.

So some ECB watchers are convinced the central bank will embark on a narrower scheme of private-sector asset-backed securities (ABS) purchasing instead.

Asset-backed securities are bundles of individual loans such as mortgages, auto credit and credit-card debt that are sold on to investors, allowing banks to share the risk of default and encouraging them to offer more credit.

Draghi has repeatedly said that preparations for such a programme are underway.

But Deutsche Bank economist Mark Wall an ABS programme “is unlikely to represent a game changer” on its own.

It could instead complement the ECB’s new or “Targeted Longer-Term Refinancing Operations” (TLTROs), a programme to pump more liquidity into the banking system, which will start in mid-September.

ECB executive board member Sabine Lautenschlaeger sought to play down market expectations for action, saying that the remarks made by Draghi in the US had been interpreted in a “one-sided” fashion.

Instead, governments should focus on structural reforms, Lautenschlaeger said.

“Without structural reform, nothing will be achieved in the medium or long-term in countries which are suffering from poor competitiveness,” she told a banking forum in Frankfurt.