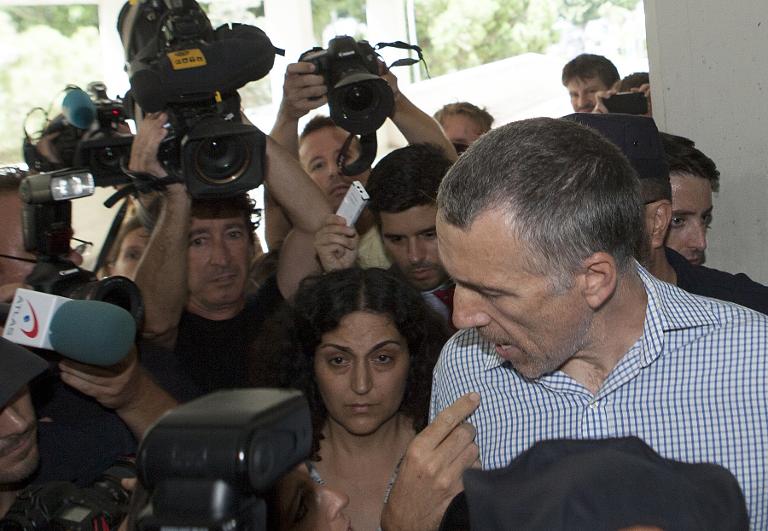 The British parents jailed after taking their critically-ill son Ashya King from hospital enjoyed an emotional reunion with him at his bedside in Spain on Wednesday, an official said.

Brett King, 51, and his wife Neghemeh King, 45, saw their five-year-old son for the first time since they walked free, following the lifting of an extradition order against them by British prosecutors.

But officials warned the desperate parents must wait for a custody ruling to know whether they can take him away from the hospital to seek the alternative treatment they wanted for his brain tumour.

“They were able to see him without any problem. It was very emotional,” said an official at the children’s hospital in the southern Spanish city of Malaga, who asked not to be named.

The couple were detained on Saturday for having taken Ashya, who has a brain tumour, out of a British hospital without doctors’ consent.

Brett King had told reporters on Wednesday he feared he would not be allowed to see Ashya because an English court has had legal custody of the boy since last week when his parents took him to Spain.

He said he and his wife were longing to see the boy again after their four days in jail, saying “there was no minute that went by without our hearts hurting to see Ashya”.

The hospital official told AFP the parents “can stay with him the whole time but they will not be able to take him out of the hospital until the custody issue is resolved”.

The top health official for the Andalusia region where Malaga is located, Maria Jose Sanchez, told reporters her department had been contacted by the court in Portsmouth and would have to consult with the justice ministry before taking “the appropriate decisions” on custody of Ashya.

The couple had been held under an international warrant for taking Ashya out of hospital in Southampton, southern England after disagreeing with doctors about his cancer treatment.

“We just want to show love to him because without that there is no purpose to life,” a visibly shaken King told reporters earlier on Wednesday, after being released.

“He hasn’t got too many months to live and we’re locked away in a cell,” the 51-year-old father told reporters. “We are just trying to speed things up to help him.”

King said Wednesday he believed the radiotherapy treatment planned by doctors in England would have turned Ashya into a “vegetable”.

“It is not the answer for a child of five. It is too strong for a child,” he said.

The Kings want Ashya to undergo an alternative treatment called proton beam therapy. Brett King said the family is selling its apartment in Malaga to fund the therapy.

Ashya’s brother Danny told the BBC he had seen Ashya on Tuesday and that “physically he’s fine but emotionally he’s very confused,” because he hasn’t seen his parents.

The Kings’ legal troubles prompted an outpouring of public support in Britain, where some 130,000 people signed a petition calling for the boy to be reunited with his parents.

Prosecutors had said they suspected the parents of “cruelty,” but the British Crown Prosecution Service said on Tuesday it was withdrawing the warrant as Ashya had been properly looked after.

British Prime Minister David Cameron welcomed news that the case had been dropped, saying on his Twitter feed: “It’s important this little boy gets treatment & the love of his family.”

Danny King told the BBC the family had received information on possible treatment in the United States, but he expected his parents would choose to take Ashya to a clinic in Prague for proton beam therapy.