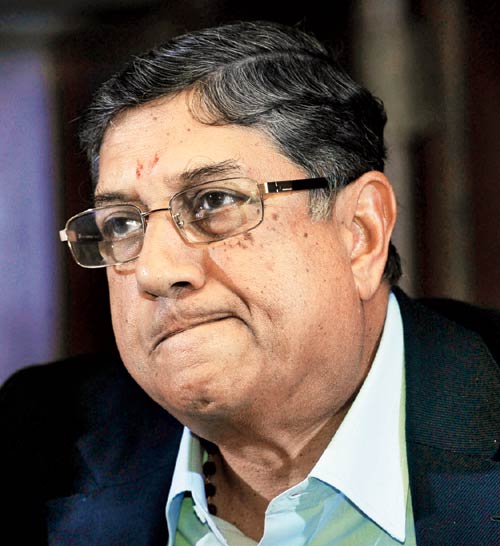 SC, in the meanwhile, allowed the Mudgal committee to file another interim report and allowed it to question Srinivasan or any other individual.

Mudgal committee had on FridayÂ sought a two-month extension to complete its probe. TheÂ committee had submitted its report to the apex court on August 29.

The report in a sealed envelope was submitted to the court by a senior lawyer instead of senior advocate Gopal Subramaniam, who had previously acted as an amicus curiae for the Supreme Court.

Last October, the apex court had constituted the Justice Mukul Mudgal panel to investigate the spot-fixing and betting case in the case-rich IPL. The three-member panel led by Justice Mudgal, a retired Punjab and Haryana High Court judge, has Additional Solicitor General L Nageswara Rao and senior advocate Nilay Dutta in the committee.

And on February 10, the committee submitted its first report to the court after conducting a four-month long probe. It is learnt that cricketers, board officials, cops, lawyers and even journalists had deposed before the panel and depositions were recorded during the probe on equipment provided by BCCI.

In the follow up, the court had asked the committee to continue its investigation of the persons named in the sealed envelope and the committee was also given greater powers to effectively conduct its probe. After agreeing to lead the investigation, Justice (Retired) Mudgal had listed for specific organisations and individuals whose assistance he would require, which included a former India cricketer “of repute and integrity”.

The committee, which was being assisted by former senior Indian Police Service (IPS) officer BB Mishra, had been given all investigative powers, including search and seizure of relevant documents and recording evidence. However, it cannot carry out any arrests. The committee was assured of assistance from one senior police officer each from Mumbai, Chennai and Delhi.