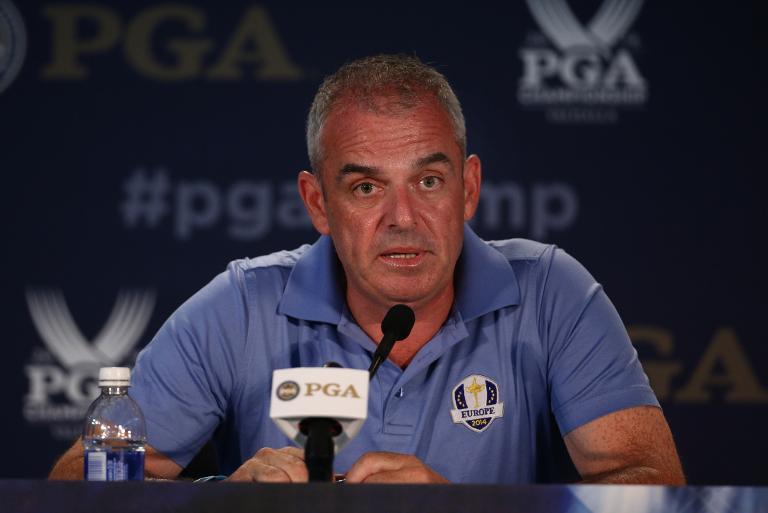 Ryder Cup captains Paul McGinley and Tom Watson take centre stage on Tuesday when they both name their three wildcard picks to complete their lineups for Gleneagles.

McGinley in particular is facing a tough choice with two former world number ones, Lee Westwood and Luke Donald, along with the Ryder Cup hero of two years ago Ian Poulter all failing to make it into the nine automatic qualifying slots.

Normally they would all be clearcut picks for the Irishman, but complicating the situation is the good form of Scotland’s Stephen Gallacher, who narrowly missed out on supplanting Graeme McDowell in the ninth and final qualifying spot by finishing third on Sunday at the Italian Open.

As it stands there are no home players in the European team as the competition returns to Scotland for the first time since Muirfield in 1973.

McGinley, who played and missed the cut in Turin, was on hand to see how hard Gallacher battled to make the team and he was full of praise for the 39-year-old who lives just 35 miles from Gleneagles and knows the course better than anyone else among the Ryder Cup hopefuls.

“It was a terrific performance by Stevie – all credit to him,” McGinley said. “He really tore the front nine apart.

“His performance this week will be very strongly in his favour when it comes to making the picks, but he’s not guaranteed a pick.

“There are other golfers to be looked at in the cold light of day.”

The challenge for McGinley, who sunk the winning putt for Europe at the 2002 Ryder Cup at The Belfry, is having at his disposal a clutch of experienced former winners whilst at the same time infusing some new blood into the team.

Already there are two rookies in the European team in the shape of Frenchman Victor Dubuisson and Welshman Jamie Donaldson and the question is can McGinley afford to select a third new face.

McDowell, who clinched the Ryder Cup win for Europe at Celtic Manor in 2010, sees no problem with Gallacher joining him in the team for the September 26-28 showdown with the Americans.

“Given the way he’s played throughout this year, and because of the type of player that he is, he would have thoroughly deserved it, especially with him being a Scot and the Ryder Cup being at Gleneagles,” he wrote in a column for the BBC.

“To me Stephen is somebody who would bring a lot to a Ryder Cup team. He’s a big hitter, he’s upbeat and a positive personality. As far as rookies go, he wouldn’t be a problem.”

Watson, an eight-time major winner brought back in as skipper to revive US fortunes, has found his task of naming three picks made much easier since Tiger Woods announced he would not be available due to continuing problems with his injured back.

Given the fact that there are already three rookies – Jimmy Walker, Jordan Spieth and Patrick Reed – already assured of being in the team, Watson is likely to look for some experienced hands.

Hunter Mahan’s recent return to form makes him an odds-on bet to get the nod, whilst Brandt Snedeker is expected tro join him.

The third choice is more open-ended with several names in the mix from former PGA Champion Keegan Bradley, former US Open champion Webb Simpson and in-form Ryan Moore, who was 11th on the points list and just missed an automatic selection.

The task for Watson is huge with the Americans desperate for success having won just once in the last six meetings.

Two years ago at Medinah outside Chicago, the US team carried a 10-6 lead into the 12 singles that comprise the final day only for Europe to stage the greatest comeback in Ryder Cup history to record an astounding 14 1/2 to 13 1/2 victory.