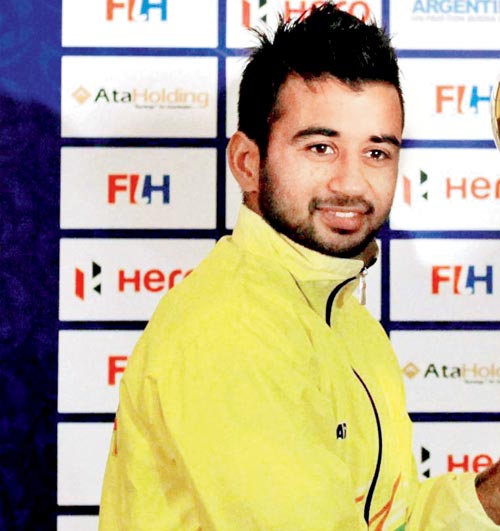 New Delhi: Rising Indian midfielder Manpreet Singh was named the ‘Junior Player of the Year’ by the Asian Hockey Federation in its meeting held in Kuala Lumpur, Malaysia.

Manpreet’s best moment was to win the Sultan of Johor Cup in Johor Bahru last year under his leadership. In this prestigious tournament, India’s junior team displayed their high-level hockey skills and defeated England, Argentina, Pakistan and South Korea. In the final match, India thrashed host Malaysia 3-0 and clinched the Gold Medal.

Manpreet made his international debut in 2011 and since then, he has been a regular member of the Indian team. The Jalandhar-lad was also a part of the silver medal winning Indian team at the Commonwealth Games in Scotland and represented India at the FIH Men’s World Cup (Netherlands), Hero FIH Hockey World League Final.

At present, Manpreet is a part of senior men’s core probable team for the 2014 Asian Games. On his special achievement, Hockey India, Secretary General Narinder Batra said, “I congratulate Manpreet for this special achievement and this also shows the potential of young Indian hockey players. Manpreet works very hard and has proved himself at all age-groups and competitions.

“Apart from a skillful midfielder, he also has the leadership qualities to motivate other players to fight till the final whistle. This announcement is a great achievement for Indian hockey.”