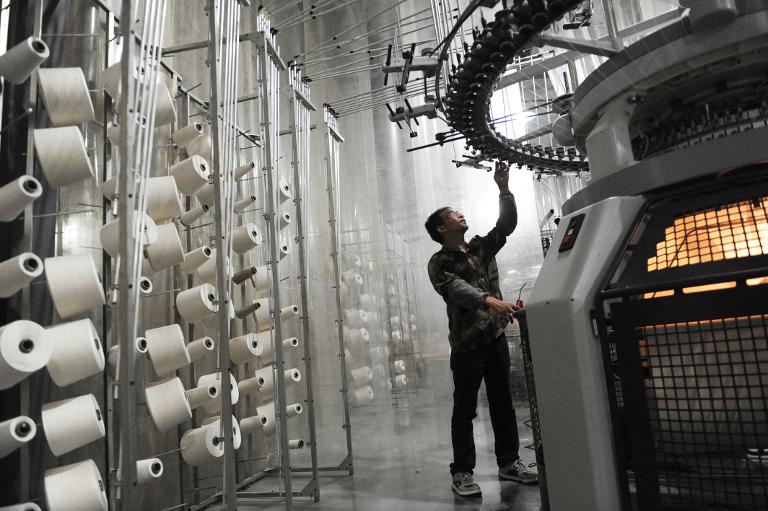 The official purchasing managers index (PMI) came in at 51.1 last month, the National Bureau of Statistics said in a statement.

The figure was down from 51.7 in July, and the first decline since slipping to 50.2 in February, according to previous data. Readings above 50 indicate growth, while anything below points to contraction.

Separately, British bank HSBC announced a fall in its own survey to a final reading of 50.2 for August, down from an 18-month high of 51.7 in July and its lowest level in three months.

The indices track manufacturing activity in China’s factories and workshops and are closely watched indicators of the health of the economy.

The official August figure came in just above the median 51.0 forecast in a survey of 10 economists by Dow Jones Newswires. July’s result had been the best since 53.3 in April 2012.

Analysts said the result indicated China’s economic recovery was being stunted by problems in the property sector — where new home prices posted their fourth consecutive month-on-month decline — as well as the weakening impact of stimulus measures taken to boost growth.

“The weak PMI data suggest that China’s shallow growth recovery has started to lose momentum, likely because of the ongoing property market correction and a decline in the efficacy of policy easing due to structural problems in the economy,” economists at Nomura International said in a report.

Authorities have since April launched a series of measures to bolster growth, including tax breaks for small enterprises, targeted infrastructure outlays and incentives to encourage lending in rural areas and to small companies.

“We think the economy still faces considerable downside risks to growth in the second half of the year, which warrant further policy easing to ensure a steady growth recovery,” Qu Hongbin, HSBC chief economist for China, said in the bank’s announcement.

Economists have worried that a potential destructive bust in housing prices could dent economic hopes of China, a key driver of global and regional growth.

An independent survey of China’s housing prices showed the fourth month-on-month fall in a row, but August’s decline was slower than July’s, as more local governments loosened purchasing restrictions to boost sales.

Julien Evans-Pritchard, China economist with Capital Economics, warned against reading too much into the slowing PMI.

“The weakness should not be cause for significant concern since it reflects a welcome correction in sectors which have suffered from overinvestment,” he said in a report.