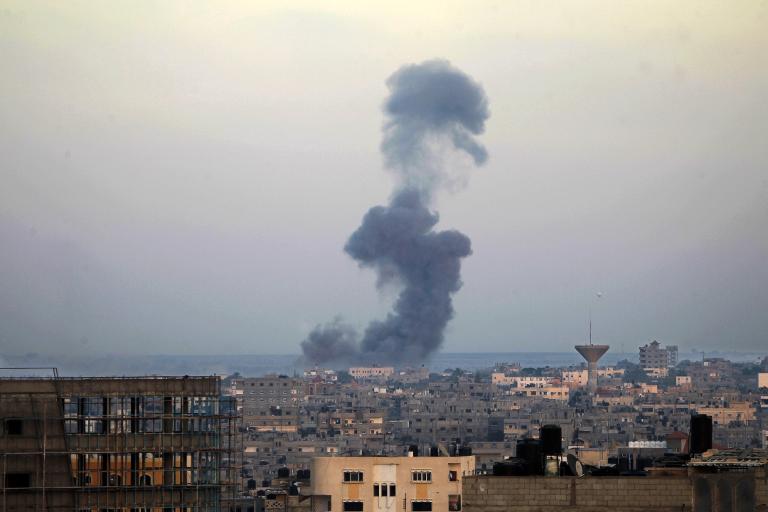 Israel vowed Thursday to keep its troops in Gaza until they finish destroying a network of cross-border tunnels, despite sharp UN and US criticism over the Palestinian death toll.

Speaking at a cabinet meeting in Tel Aviv, Prime Minister Benjamin Netanyahu said he would not accept any ceasefire that did not allow troops to continue destroying tunnels used by militants to attack Israel.

“Until now, we have destroyed dozens of terror tunnels and we are determined to finish this mission — with or without a ceasefire,” he said at the start of the meeting.

“So I will not accept any (truce) proposal that does not allow the (military) to complete this work for the security of Israel’s citizens.”

His remarks came after the army confirmed mobilising another 16,000 reservists, hiking the total number called up to 86,000. Israel does not say how many troops are currently fighting inside the Gaza Strip.

But the UN Security Council called for humanitarian pauses in Gaza and renewed its appeal for an immediate ceasefire.

The Council expressed “grave disappointment” that repeated appeals for an end to the fighting had not been heeded.

Washington said it had agreed to restock Israel’s dwindling munitions supplies, despite increasing international concern over the death toll in Gaza, where 1,437 people have been killed in 24 days of violence.

But the White House on Thursday said there was little doubt Israeli artillery was the source of a “totally indefensible” strike that killed 16 people at a UN school in Gaza, the day before.

“It does not appear there’s a lot of doubt about whose artillery was involved in this incident,” White House spokesman Josh Earnest said

“There is clearly more that can and should be done to ensure the safety of innocent civilians,” he added.

UN figures indicate two-thirds of the conflict’s victims are civilians, nearly half them women and children.

The top UN refugee official in Gaza told the Security Council on Thursday that his UNRWA Palestinian refugee agency was stretched to breaking point by the massive humanitarian fallout from the fighting.

“I believe the population is facing a precipice and appeal to the international community to take the steps necessary to address this extreme situation,” Pierre KrÃ¤henbÃ¼hl said.

The European Union on Thursday condemned the hit on the school, in the Jabalia refugee camp, which had been turned in a shelter for people forced out of their homes by the fighting.

“It is unacceptable that innocent displaced civilians, who were taking shelter in designated UN areas after being called on by the Israeli military to evacuate their homes, have been killed. These incidents must be investigated with immediate effect,” it said.

The shelling of the school also drew sharp condemnation from UN chief Ban Ki-moon, who described it as “reprehensible”.

But Israel’s army suggested the deaths may have been the result of a misfired Palestinian rocket.

“It is not clear if the school was hit by fire from IDF soldiers or from Hamas terrorists,” military spokesman General Moti Almoz told army radio.

Despite rising international calls for a halt to the bloodshed, the Israeli security cabinet decided Wednesday to press on with the Gaza operation.

The offensive began on July 8 with the aim of ending militant rocket fire, but expanded on July 17 with a ground operation aimed at destroying a sophisticated network of cross-border tunnels which Israel has vowed to dismantle.

Despite a heavy death toll in Gaza on Wednesday when 111 Palestinians were killed, including the 16 at the school and 17 who died in a strike on a crowded market place, Washington said it had restocked the Israeli army’s munitions supply.

There was no let-up Thursday in the bloodshed with at least 50 Palestinians killed, another 14 dying from injuries suffered in earlier attacks and a growing number of bodies pulled from under rubble in areas near Khan Yunis, medics said.

Eleven were killed in an Israeli air strike on a house in the central Gaza Strip’s Nusseirat refugee camp, while three more were killed in night-time strikes in the south of the strip, and a body was recovered from rubble in the town of Khan Yunis

And another 15 people sheltering in the UN school in Jabaliya refugee camp that was struck on Wednesday were wounded when Israeli warplanes attacked a mosque next door, medics said.

In Israel, 56 soldiers have died and Hamas rocket fire has killed three civilians, two Israelis and a Thai farmworker.

Despite the loss of life, there appeared to be little Israeli appetite for a truce, with a senior official telling Haaretz newspaper that a ceasefire was not even close.

Nevertheless, an Israeli delegation travelled to Cairo late Wednesday to discuss a possible ceasefire with Egyptian officials, an official at the airport told AFP.