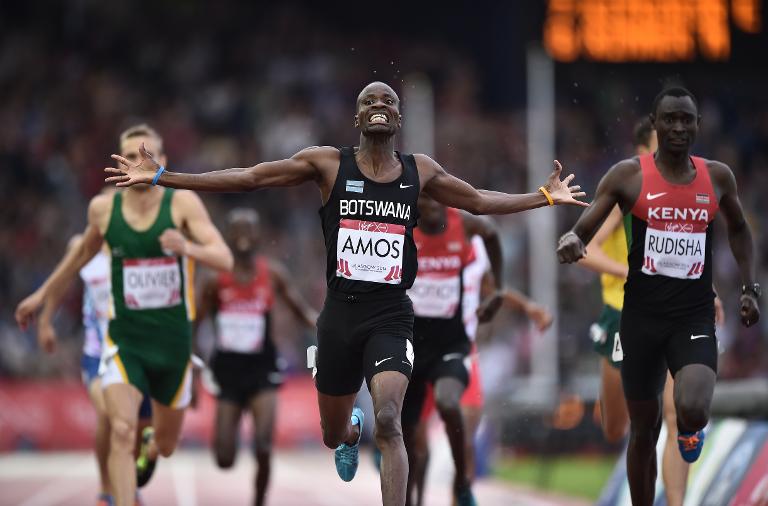 Rasheed Dwyer led a Jamaican clean sweep of the men’s 200m to emulate teammate Kemar Bailey-Cole’s victory in the 100m, the two sprint golds going some way to make up for the absence of Usain Bolt, who will only compete in the 4x100m relay.

Kenya’s Rudisha, who set a blistering world record when winning Olympic gold in London, had finished ahead of silver medallist Amos in the British capital in 2012.

But there was revenge in the wet Glasgow air, Amos producing a sublime, fast-paced finish to outdo his Kenyan nemesis, clocking 1min 45.18, with Rudisha at 0.30sec. South African Andre Olivier took bronze in 1:46.03.

“The race was good but the last 100m was difficult. I didn’t have good preparations,” Rudisha said in reference to a calf injury that only saw him make his track comeback in May.

Botswana’a Amos was quick to heap praise on Rudisha, saying: “This gentleman will always be the hero of the 800m.”

Okagbare kept her bid for a Commonwealth treble on course as she added the 200m crown to her 100m title, the US-based 25-year-old still to run in the 4x100m relay.

Vikas Shive Gowda won the discus with 63.64m to end India’s 56-year gold medal drought in men’s athletics at the Games, the last winner being Milkha Singh over 440 yards at the 1958 edition in Cardiff.

Australia’s Olympic champion Sally Pearson showed no fall-out from the suspension of head coach Eric Hollingsworth for his outspoken criticism of the star hurdler for missing a pre-Games team training camp.

Pearson scorched into Friday’s final of the 100m hurdles with a time of 12.69sec, tellingly punching the air as she came through the line.

Alex Dowsett, second to David Millar four years ago in the men’s road cycling time trial, claimed Commonwealth gold for England in a closely-contested race through the streets and suburbs of Glasgow.

Millar, in his final season, was eighth.

It was England’s first gold medal in road cycling in 28 years and the winner said that being dumped by his team for the Tour de France was extra motivation.

“The Commonwealth Games was a big target for me anyway, but it suddenly became a huge target because I really wanted to do something big after the disappointment of the Tour de France,” he said.

Pooley, who is to retire after the Games, had to settle for silver while Australia’s Katrin Garfoot took the bronze.

Canada moved up into third place in the medals table with two golds in wrestling, courtesy of Danielle Lappage in the women’s -63kg division and Tamerlan Tagziev in men’s -86kg.

George Kobaladze won the final weightlifting gold for Canada by taking the +105kg title with a new Games record combined weight of 400kg in the snatch and the clean and jerk.

In gymnastics, England won three of the five golds on offer through Max Whitlock in the men’s floor event, Claudia Fragapane in women’s vault — her third title of the Games — and Rebecca Downie on the uneven bars.

At just 22, Downie still ranks as the oldest gold medallist in the event.

India took two wrestling golds thanks to Babita Kumari in the women’s -55kg and Yogeshwar Dutt in the men’s -65kg.

Canada were the most successful wrestling nation with seven golds while India won five.