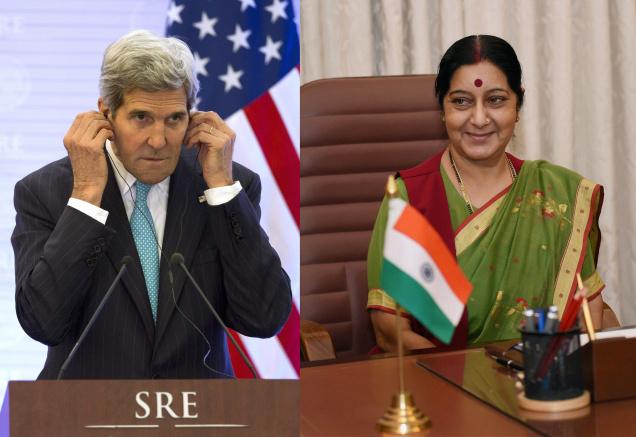 New Delhi: Indiaâ€™s External Affairs Minister Sushma Swaraj has told the US Secretary of State John Kerry that spying is not acceptable between two friendly nations.

During a joint press conference after India-US Strategic Dialogue in the capital on Thursday Swaraj asserted the point was brought up that US agencies allegedly snooping the BJP would not be accepted. Kerry responded by saying, â€œWe fully understand and respect the feeling expressed by India on snooping.â€

He however refused to discuss the issue further with the media, calling it an intelligence matter that could not be discussed publicly.

“We don’t discuss intelligence matter publicly. But we value sharing of information regularly on counter terrorism with India. US President Barack Obama clearly articulated that we fully respect and understand feelings expressed by Indian nationals,” he said.

According to a recent media report that caused a storm, highly sophisticated listening devices were planted at the residence of Union Minister Nitin Gadkari & those devices were used only by western intelligence operatives, particularly the Central Intelligence Agency (CIA) and the National Security Agency (NSA).

Earlier in the day, Kerry met Finance Minister Arun Jaitley and discussed India’s stance on the ongoing WTO’s Trade Facilitation Agreement talks that are set to conclude at Geneva later in the day. India has stood defiant to the deal as it points out the negative impact on such a deal to the farmers of India, who are already under pressure with the lack of monsoon.

However the US expressed confidence that the Summit Meeting between Prime Minister Narendra Modi and President Barack Obama in Washington D C in September would generate new dynamism in the relationship.

The countries also discussed the common threat of terrorism, including in South Asia. Co-chaired by Kerry and Sushma, the dialogue saw the two leaders commit to intensify efforts to combat terrorism, proliferation of WMDs, nuclear terrorism, cross-border crime, and address the misuse of the internet for terrorist purposes, in compliance with respective laws.

The two leaders welcomed the continuation of the Counter-Terrorism Joint Working Group process, sustained exchanges of senior experts, and the upcoming meeting of the Working Group in 2014 and plans to hold the next Ministerial Homeland Security Dialogue.

They agreed to have their Central Authorities meet to discuss ways to improve mutual legal assistance and extradition processes. They also agreed to work towards greater cooperation in cyber security and reducing cybercrime.

Secretary Kerry welcomed raised foreign investment ceilings in several sectors of the Indian economy, including defense, railways, e-commerce and insurance.The two sides agreed to identify specific areas for investment in India’s manufacturing and infrastructure sectors including through establishing a new initiative in this regard. They also sought to empower the India-US CEO Forum to build a better business environment.