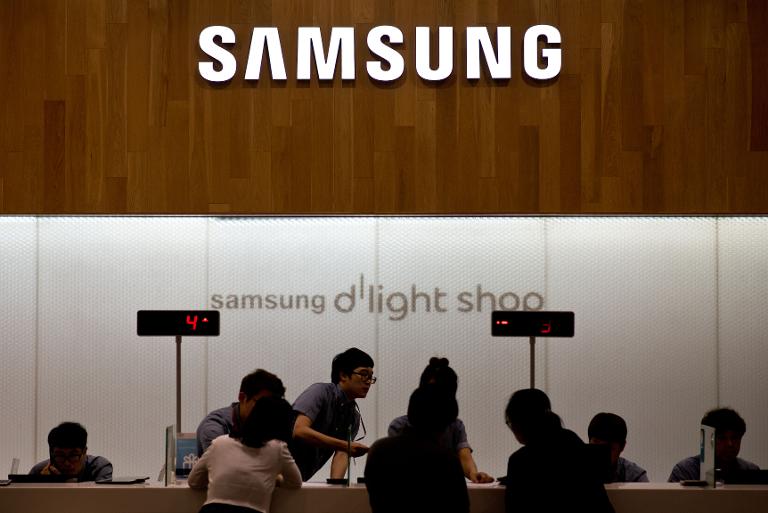 “The second quarter was affected by several factors including the slow global sales of smartphones and tablets and escalating marketing expenditure to reduce inventory,” the company said in its earnings report.

“The appreciation of the Korean currency also chipped away at this quarter’s operating profits, which amounted to about 500 billion won in missed revenues prompted by the foreign exchange market,” it said. The firm added that the second half of 2014 would “remain a challenge”.

The won is currently running at six-year highs against the dollar, hitting South Korea’s export-driven economy.

Thursday’s figures were in line with earnings estimates released earlier this month, when Samsung also issued an explanatory note attributing the profit decline to increased competition from cheap Chinese devices.

Samsung had expressed cautious optimism about a more positive third quarter with the release of its new smartphone lineup, and a much lower marketing spend compared with the second quarter.

But while the company is expected to roll out a new version of its popular oversized Galaxy Note smartphone, the next quarter will also see the expected launch of the iPhone 6 by main high-end rival Apple.

Alarm bells have been sounding for a while over Samsung’s reliance on smartphone sales in mature markets such as Europe and the United States.

Efforts to expand sales in emerging markets, most notably China, have stumbled over the growing challenge posed by smaller rivals producing cheaper handsets.

“There are concerns about profit margins being squeezed in a short term… but growth of the low-and mid-end market is a global trend,” Kim said in a conference call.

“We will respond more aggressively to meet demand in the Chinese market…in the latter half of this year by introducing more products with better specification as well as better price competitiveness,” he said.

But he added that concessions on price would probably prevent and improvement in mobile unit profits in the third quarter.

The world’s largest smartphone maker has a diverse product line ranging from memory chips to home appliances, but more than half of its profits are generated by mobile devices.

The consumer electronics unit — selling products from TVs to refrigerators — saw operating profit surge 80 percent on-year to 770 billion won, but not enough to offset the decline in the mobile business.

April saw the global roll-out of the latest version of Samsung’s flagship Galaxy series smartphone, the Galaxy S5, which came with a free premium software bundle valued at more than $500 as the firm sought to pull in buyers tempted by cheaper models from Chinese rivals like Lenovo and Huawei.

Initial sales of the S5 were positive, although critics said it offered little in the way of real innovation to set it apart.

There is a general consensus that smartphone evolution has hit a barrier that will only allow incremental improvements on existing design and technology, rather than market-changing reinvention.

“You can say Samsung’s smartphone heyday is now over,” said Greg Roh, a Seoul-based analyst at HMC Investment Securities.

“Given that companies are now competing over price rather than hardware specification, the key challenge will be how to minimise the pace of profit decline,” he said.

According to International Data Corp., a record-high 295.3 million smartphones were shipped worldwide in the second quarter.

Huawei nearly doubled its shipments from the same quarter a year ago, while Lenovo also weighed in with strong performance, IDC figures indicated.