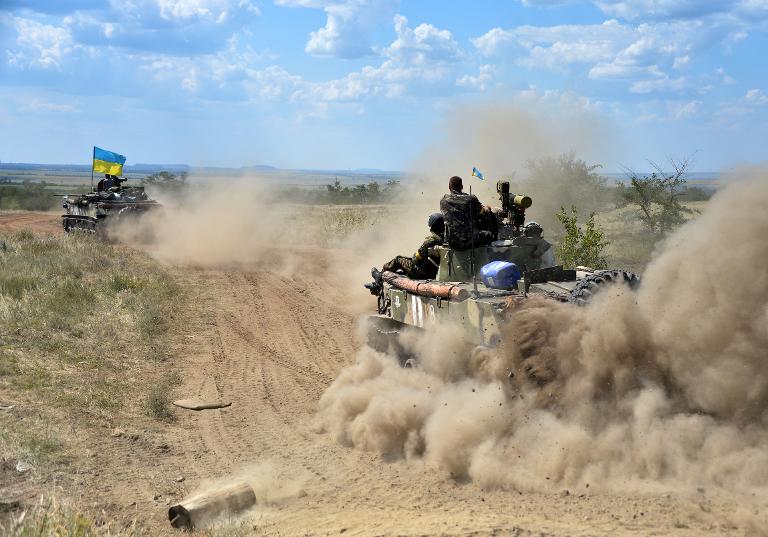 A defiant Russia said Wednesday that Western sanctions over Ukraine would backfire on the United States and lead to energy price hikes in Europe after Brussels and Washington unveiled the toughest punitive measures against Moscow since the Cold War.

Russia’s response came as the Ukrainian military pushed on with its offensive against pro-Russian rebels in the east, retaking the town of Avdiyivka, only a dozen kilometres (eight miles) from the main rebel city of Donetsk.

The Russian foreign ministry warned the United States it was shooting itself in the foot and said it was punishing the Kremlin for “independent policies that Washington finds inconvenient.”

“This is a thoughtless, irresponsible step. It will inevitably lead to an increase in prices on the European energy market,” the foreign ministry said.

Meanwhile the fighting between Kiev forces and rebels prevented a Dutch and Australian police contingent from visiting the crash site for the fourth day running.

The head of the Dutch recovery mission said it was unlikely the security situation would improve enough “over the next few days” to reach the site, where the remains of some of the 298 victims still lie nearly two weeks on.

“There is still too much fighting in the area,” Pieter-Jaap Aalbersberg told reporters in Kiev.

One Ukrainian soldier was killed and 11 wounded over the past 24 hours, according to authorities.

And the Group of Seven major developed economies warned that Russia faces still tougher sanctions if it does not change course.

“Russia still has the opportunity to choose the path of de-escalation,” the G7 powers said in a joint statement released by the White House.

“If it does not do so, however, we remain ready to further intensify the costs of its adverse actions.”

Russia provided few details of possible retaliation but earlier Wednesday its agricultural watchdog banned the import of all fruit and vegetables from EU member Poland, one of the staunchest supporters of Kiev’s pro-Western course.

“What exactly are our partners seeking?” he said on a visit to Tajikistan.

But Russian banks put on a brave face, saying their operations would not be affected and that they would seek funding outside the United States and Europe.

And Russian markets rallied Wednesday, with investors relieved that the Western sanctions were not even tougher. The main stock indices gained around two percent and the ruble firmed against the dollar and the euro.

Existing contracts including France’s 1.2 billion euro ($1.6 billion) deal to deliver two Mistral warships to Russia will be exempt from sanctions, and Paris said it would go ahead with the sale of the first vessel.

Some EU diplomats and Russia experts expressed concern that tighter sanctions may in fact embolden Putin, convincing him that he no longer has anything to lose by further escalating the Ukraine conflict.

“The confrontation will increase abruptly. Putin has been practically driven into a corner, and this man does not make concessions under pressure,” Nikolai Petrov of the Higher School of Economics told AFP.

Fuelling the concern, NATO’s top commander, General Philip Breedlove, said Wednesday that Russia had boosted the number of troops along the border with Ukraine to “well over 12,000” and the number was on the rise.

In addition, Russian weaponry contingents in the crisis area include “every kind of weapon, supplies, man portable weapons, field weapons, armoured vehicles, all of the weapons,” he said on a visit to Kosovo.

The troop presence had dropped to fewer than 1,000 in June.

In addition to the financial markets, EU sanctions also banned future sales of weapons and dual-use technologies, especially in the key energy sector.

Meanwhile, Ukraine’s President Petro Poroshenko gave the go-ahead for Kiev’s representatives to travel to Belarus on Thursday for possible talks over access to the MH17 crash site.

Top separatist Andrei Purgin said he would likely take part in the talks if they happen, adding that the rebels want Ukrainian forces to withdraw entirely from their territory.

Kiev said it does not plan to take back the crash site by force.