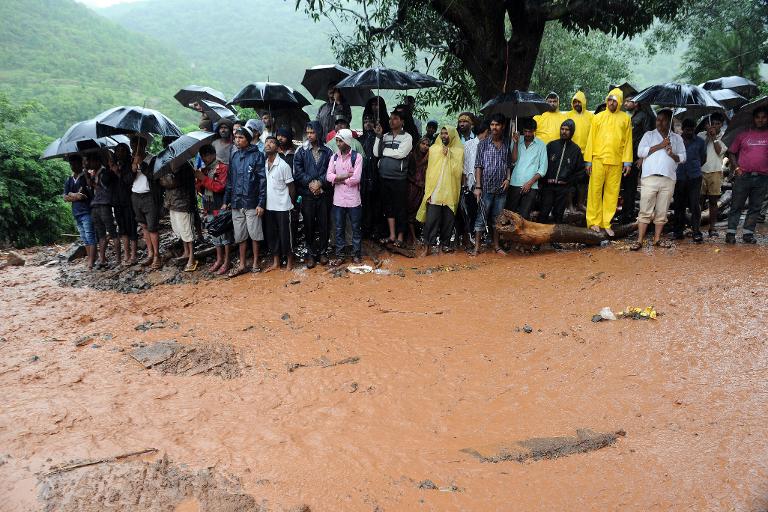 Rescuers were desperately searching into the night Thursday for victims of a landslide in western India that buried dozens of homes, with fears the death toll could reach 150.

Forty two people were confirmed dead and eight pulled alive from the mud and debris in Maharashtra state, but with rain and strong winds hampering rescue efforts, hopes of finding any more survivors were fading.

“Miracles do happen, we will keep looking, but under current conditions it is very, very bleak,” said Alok Avasthy, a National Disaster Response Force (NDRF) commander at the scene, who added about 160 people were thought to have been living in the dozens of damaged houses.

Relatives told of losing whole families after the hillside gave way early on Wednesday in a remote area of Pune district, sending tonnes of earth and trees crashing onto a village below.

“I lost my dad, mum, nephew, my whole family. What will I do? I have nothing left,” inconsolable Usha Vilas Gavar, 30, told AFP close to the scene.

Twisted metal utensils and shreds of clothes lay among the debris from the landslide which hit Malin village while most of its residents were sleeping.

The NDRF said eight survivors have so far been pulled from the site, but rescue efforts were slow going, with heavy machinery halted at one point because of the rains.

Avasthy told AFP late Thursday that 42 victims have now been discovered by rescuers, who were working into the night, after lights powered by portable generators were set up.

Among the handful rescued were Pramila Lembe, 25, and her three-month old baby Rudra, who were recovering with no major injuries in hospital having been shielded by their home’s tin wall.

“I was breast-feeding the baby when I heard a loud thunder-like clap. I tried to run but the wall collapsed,” Lembe told AFP.

“I held the boy somehow. I tried to shout but heard no one,” she added. The pair were found by rescuers about eight hours after the landslide.

Dramatic footage of the landslide showed a chunk of hillside giving way on Wednesday with a cascade of mud, rocks and trees, sending up clouds of dust below.

“The mudslide must have been massive and very quick considering it has covered an area roughly the size of a football field with nearly 10-15 feet (3-4.5 metres) of debris,” Avasthy said.

The NDRF mobilised 378 rescue workers to help with the search, although its vehicles had difficulty accessing the site along narrow, damaged roads. The army was seen arriving to help on Thursday afternoon.

Sniffer dogs remained locked up in a village health centre because the animals were unable to pick up scents in the incessant rains, while workers faced the risk of further landslides.

“We have to ensure that we maintain environmental balance along with development,” he told reporters.

The alarm was first sounded when a bus driver failed to see the usual hamlet dwellings as he drove past the area, according to the Press Trust of India news agency.

PTI said the victims were members of a tribal community that survived by paddy farming on hill slopes in the once densely forested region.

Prime Minister Narendra Modi described the loss of life as “saddening” on Twitter.

While India’s annual rains are a lifeline for the Indian economy, flooding and building collapses are frequent during the monsoon season.

A landslide in the eastern state of Odisha on Thursday cut off about a dozen villages, while another in the northern Himalayan state of Uttarakhand killed at least five people.

Uttarakhand was hit by a landslide and flooding disaster last year that is thought to have killed nearly 6,000 pilgrims, tourists and others.