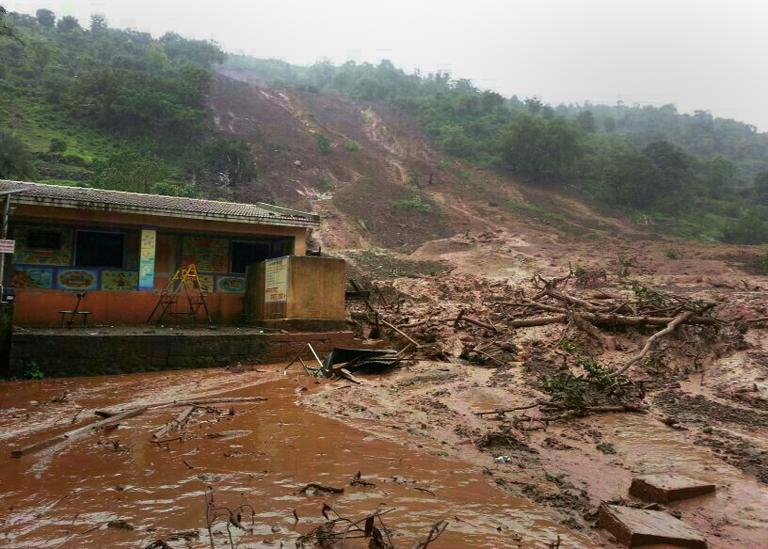 The death toll from a major landslide Wednesday in western India was expected to exceed 150, a health official said, after heavy monsoon rains sent mud and rocks tumbling onto homes.

Emergency forces rushed to a remote village in the state of Maharashtra, where a hill collapsed in the morning as residents were reportedly sleeping.

“We have removed 19 bodies. We expect about 140 more to come considering 44 houses were buried,” said H.H. Chavan, the affected Pune district’s deputy director of health.

“The majority of deaths are due to the crush-load of rubble which has buried the village,” Chavan told AFP in Ghodegaon, a neighbouring village that has become a nerve centre for the rescue operation.

The National Disaster Response Force said it had mobilised nine teams with a strength of 378 trained personnel to help with the rescue effort, although ongoing rains have been hampering operations.

Television footage showed a chunk of hillside dramatically giving way and a cascade of mud, rocks and trees, sparking clouds of dust below.

Prime Minister Narendra Modi described the loss of life as “saddening” on Twitter, while footage showed workers carrying a victim on a stretcher towards vehicles as a crowd watched.

The police have cordoned off the affected village after people trying to reach the scene of the disaster caused miles-long jams, hampering the movement of rescue workers.

Currently only ambulances and other rescue vehicles are allowed beyond the cordon.

Pravin Sadhale, with the Maharashtra Emergency Medical Services, said rescue equipment was getting stuck in the narrow roads.

“The issue is that as we remove the mud, more is flowing in since the rains have been incessant,” he said.

The rescue operation is also a challenge because the area is 15 to 20 kilometres (nine to 12 miles) from the nearest medical facility, said Divisional Commissioner Prabhakar Deshmukh.

Heavy rains have lashed Maharashtra and other parts of India as a result of the annual monsoon.

Downpours have triggered small landslides in the Himalayan states of Himachal Pradesh and Uttarakhand in recent days, while authorities are closely watching rising river levels in case of floods.

In Himachal Pradesh’s capital of Shimla, rains have uprooted trees, knocked out power and triggered slides.

Landslips have blocked roads to popular Hindu pilgrimage sites in Uttarakhand, which was hit by a landslide and flooding disaster last year that is thought to have killed nearly 6,000 pilgrims, tourists and others.

Building collapses are a common occurrence in India, especially during the rainy season, with millions living in dilapidated old structures or newly built but illegal constructions made from substandard materials.

A similar accident on the outskirts of Mumbai last year left 74 dead.

British daily The Guardian last year gathered statistics showing that 2,651 people were killed across India in 2012 from the collapse of 2,737 structures, including houses and bridges.