Home Sports India in a spin as England eye victory 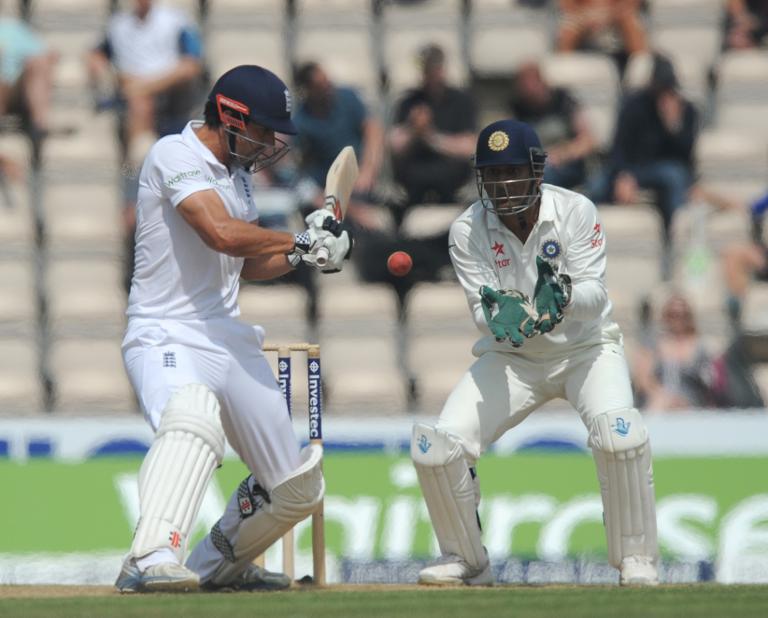 England were in sight of their first win in 11 Tests as they closed in on a series-levelling victory against India at Southampton on Wednesday.

India were 112 for four, still needing a further 333 runs to make what would be a new record 445 to win, at stumps on the fourth day of the third Test.

Renowned for their ability to play spin, India lost three wickets to Moeen Ali and Joe Root — both primarily batsmen and regarded as ‘part-time’ off-break bowlers.

At stumps, Ajinkya Rahane was 18 not out and Rohit Sharma, dropped on five, six not out.

The most any side has made in the fourth innings to win a Test is the 418 for seven by the West Indies against Australia at St John’s in 2002/03.

There was one concerning moment for England after play ended when paceman James Anderson, celebrating his 32nd birthday Wednesday, appeared to have words with Rahane before Australian umpire Rod Tucker intervened in a bid to calm tempers.

Anderson is already facing disciplinary action by the International Cricket Council following his bust-up with India’s Ravindra Jadeja during the drawn first Test at Trent Bridge and could be banned from the rest of this series if a teleconference hearing on Friday goes against him.

“Moeen’s getting better and better the more he bowls, he’s working very hard at it and getting results,” the Australian told Sky Sports.

Meanwhile Saker, himself a former first-class seamer with Victoria and Tasmania, was delighted by the way England had bounced back from a humbling 95-run second Test defeat at Lord’s that put India 1-0 up in the five-match series.

“It’s been a good Test for bat and ball so far. The impressive thing has been the players’ attitude — they’ve not blamed anything, they’ve got stuck in.

“Jimmy has got back to his magnificent control.”

After Anderson took the two wickets needed to wrap up India’s first innings, England captain Alastair Cook opted against enforcing the follow-on and England made a brisk 205 for four before Cook declared.

The last thing India needed now was a run out but that was exactly what they got.

And 26 for one became 29 for two when Ali struck second ball to dismiss Cheteshwar Pujara (two) with the aid of a sharp slip catch by Chris Jordan.

After India had started to rebuild, Cook’s decision to bring on Root proved inspired when he dismissed the well-set Dhawan for 37.

Root produced a classic off-break which turned away from the left-hander and found the outside edge, with Jordan holding another smart slip catch.

Ali, reprimanded by the International Cricket Council for wearing ‘Save Gaza’ and ‘Free Palestine’ wristbands earlier in this match, then found himself centre stage again for his bowling.

He produced a ball that went straight on with the arm and the struggling Virat Kohli (28) pushed hard, with England debutant wicketkeeper Jos Buttler holding the outside edge at the second attempt.

India were now 89 for four on another sunny day ideal for batting and on an essentially good pitch.

And they would have been 102 for five had Anderson held a low but catchable return chance off Sharma.

India, 323 for eight overnight in reply to England’s first innings 569 for seven declared, were dismissed for 330.

Anderson finished with five for 53 in 26.1 overs — the 16th time in 97 Tests he had taken five wickets in an innings.

England then got the quick runs they wanted, with Cook sweeping left-arm spinner Jadeja for four to complete his second fifty of the match.

It was the first time left-handed opener Cook, who made 95 in the first innings, had scored two fifties in a Test since his 96 and 106 against Sri Lanka at Lord’s in 2011.

Root, playing exactly the innings England required, was eventually bowled by Jadeja for 56 off just 41 balls, with Cook declaring when he himself was 70 not out.