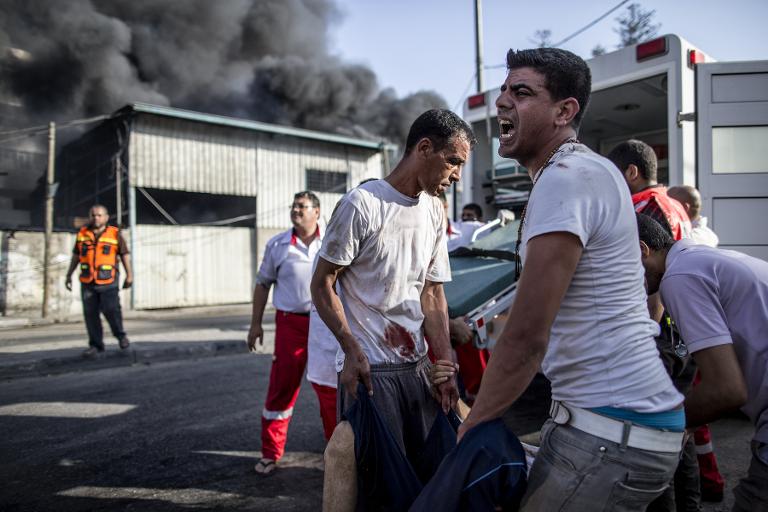 They had ventured out in their hundreds to stock up on provisions during a rare lull in the fighting in Gaza, and were crowded into Shejaiya market when Wednesday’s explosions hit.

Moments later, there were scenes of utter carnage, with bodies strewn across the street and blood everywhere.

The result was the same: 17 people killed and more than 200 wounded as the Israeli army said it was observing a four-hour humanitarian ceasefire.

Ambulances raced racing towards the site of the blast as medics and residents frantically tried to gather up the dead bodies.

An AFP correspondent saw at least five bodies being shoved onto stretchers and driven off to hospitals or mortuaries as quickly as the ambulances could take them.

Even civilian cars were used to evacuate the dead and the wounded.

“They (the Israelis) saw them evacuating the wounded, and they struck them again,” he said as a nearby building burned, belting out smoke as debris littered the street.

A bloodied, limp lifeless body lay in a pool of petrol and mud, his head crushed.

“There were journalists over here, and they hit them as well as they stood next to the ambulances,” he shouted.

TV images showed at least one journalist lying motionless in the street, his flak jacket with “Press” on the front soaked in blood.

“We want Qassam to strike back, in the heart of Tel Aviv!” he said of the Ezzedine al-Qassam Brigades, the armed wing of Hamas.

It was not the first time this battered district between Gaza City and the border had taken the brunt of Israel’s 23-day assault.

On July 20, more than 100 people were killed in the district on the single bloodiest day in Gaza in more than five years, as Israel staged a blistering offensive, pounding the district to dust and leaving bodies scattered in the streets.

Earlier on Wednesday, another 16 people were killed when at least two Israeli tank shells slammed into a UN school in Jabaliya refugee camp in the north, in an attack angrily denounced by the UN chief and the world body’s agency for Palestinian refugees.

Doctors at the Kamal Adwan hospital in Jabaliya town had scarcely finished treating the wounded when casualties began arriving from the market.

Earlier, doctors had treated dozens of wounded from the strike at the school.

“There were something like 30 or 40 wounded brought here, most of them women, children and the elderly,” said nurse Abed al-Bahtiti.

“We had to amputate some people’s legs immediately.”

Scout volunteer Abdullah Kallash, 22, had been at the school picking up body parts after the blast.

“Many of the wounded had injuries to their lower half, to their legs,” he said.

Back at the school, children and men gathered to watch the grim spectacle of dead donkeys being lifted by crane and dumped unceremoniously into a skip, their entrails hanging out.

The area stank, but the school was still full of displaced people who had nowhere else to go.

Despite the carnage in Shejaiya, others in Gaza City were able to make the most of the lull to buy much-needed provisions, with men queueing for hours in the searing heat to buy bread, with hundreds of people in each bread line.

“We’ve been here for four hours waiting to buy bread. We fled from Shejaiya and are staying with relatives, 50 of us in one house,” said Mussa Jundiya, a father of five.

“We have just enough simple food, thank God, but no means of cooking because there’s no electricity since they hit the power station.”

Others in the queue said they had no roof over their heads.

“We’re sleeping on this,” said 28-year-old Rami al-Ghula, pointing at the ground.

“We’re living in the courtyard of Shifa hospital.”