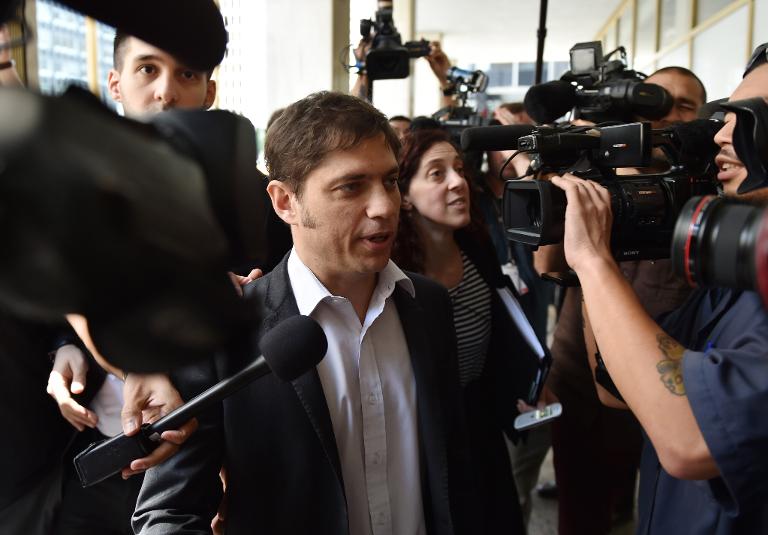 Argentina was locked in 11th-hour talks on Wednesday to seek a deal with “holdout” creditors and stave off a crippling new default — the second in 13 years — at day’s end.

Buenos Aires had until midnight to resolve its dispute with two US hedge funds whose refusal to accept a write-down on debt it defaulted on in 2001 has pushed Latin America’s third-largest economy to the brink of a new crisis.

Argentina is due to make a $539 million payment on its restructured debt by Wednesday, the end of a 30-day grace period.

But a US court has blocked it from doing so unless it also pays the hedge funds, NML Capital and Aurelius Capital Management — a ruling Buenos Aires says jeopardizes its entire debt restructuring deal.

Argentine Economy Minister Axel Kicillof and his team made no statement as they arrived Wednesday morning at the offices of the US court-appointed mediator tasked with breaking the impasse.

Kicillof, who flew in from Venezuela to add his weight to the negotiations, vowed after Tuesday’s talks to “work at this with every bit of serious attention the issue deserves.”

Argentine officials met the hedge funds’ representatives face-to-face for the first time Tuesday, a move that mediator Dan Pollack had long urged. Pollack said there had been a “frank exchange of views and concerns.”

US District Judge Thomas Griesa’s ruling has trapped Argentina in a Catch-22, barring it from servicing its restructured debt without also paying the holdouts the full $1.3 billion it owes them.

Buenos Aires says paying the holdouts, which it calls “vulture funds,” could expose it to claims for up to $100 billion from creditors who had previously agreed to take a 70-percent haircut.

There were signs that a last-minute deal could be reached or even prove unnecessary.

Argentine media reported Wednesday that a group of private banks there is seeking to buy up the holdouts’ bonds — which would make the New York talks moot — or put up a guarantee of $250 million to smooth negotiations.

The reports cited sources in the finance sector who said the buyout offer would be put on the table Wednesday.

Argentina also got a boost Tuesday from a group of holders of euro-denominated bonds who appealed to Griesa to put a stay on his verdict, saying they were willing to drop the so-called “RUFO clause” — short for Rights Upon Future Offers — under which they could launch claims for equal treatment with the holdouts.

They asked the US federal judge to suspend his decision long enough for that to be arranged.

Argentine stocks were 6.38 percent higher in afternoon trade, on the back of a 6.53-percent gain Tuesday fueled by optimism that a deal would be reached.

But Griesa’s ruling has demonstrated the power of a handful of holdouts to scuttle such deals, leaving Argentina scrambling to bridge the gap between the expiry of the RUFO clause at the end of the year and the Wednesday payment deadline on its restructured bonds.

Analysts have warned a default would deepen the economic malaise gripping Argentina, exacerbating its unruly inflation — prices rose 15 percent in the first half of the year — and perhaps forcing another devaluation of the peso, already devalued 20 percent in January.

A default would also likely prolong Argentina’s isolation from international capital markets, which it has been locked out of since halting payments on its more than $100 billion in foreign debt in 2001.

That default, the largest ever at the time, plunged Argentina into an economic and social crisis that it is still battling to overcome.

The global consequences of a new default would however be far smaller than in 2001, analysts say, as Argentina has since been isolated from world financial markets.