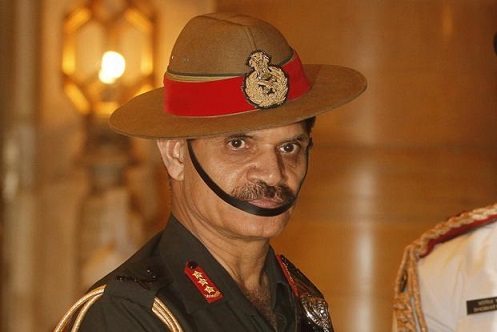 From a son of subedar to the Army Chief of the largest democracy, GeneralÂ Dalbir Singh Suhag has climbed the ladder of service for 40 years, becoming the 26th Chief. He is the second to rise to the rank from the Gorkha Rifles after the late Field Marshal Sam Manekshaw.

The company commander for the peace keeping force in Sri Lanka and later countering insurgency in the Kashmir Valley, Suhag worked his way to the top from a village school to the National Defence Academy in 1970.

General Suhag was born in Bishan village inÂ Haryana’sÂ Jhajjar district, and is a third-generation soldier and son of a retiredÂ subedar (foot soldier).

Suhag was commissioned into theÂ 4th battalion of the 5 Gorkha RiflesÂ in June 1974. He was an instructor at theÂ Indian Military Academy, Dehradun and served as a company commander duringÂ Operation PawanÂ inÂ Sri Lanka.

He has commanded the 53 Infantry Brigade which was involved in counter insurgency operations in theÂ Kashmir ValleyÂ from July 2003 to March 2005, and the 8 Mountain Division inÂ Kargil from October 2007 to December 2008. He was also appointed as the Inspector General of theÂ Special Frontier Force.Â

His various accomplishments include studies at College of Defence ManagementÂ in 1997-98,Â National Defence CollegeÂ in 2006, Executive Course in USA in 2005 and Senior Mission Leaders Course (UN) in Kenya in 2007.

In 2012, when General Suhag was heading Eastern Command in Dimapur, Nagaland, then outgoing Army ChiefÂ Gen. V K SinghÂ imposed Â a ‘Discipline and Vigilance’ banÂ for a failed intelligence operation inÂ JorhatÂ in Assam. The Former General made it clear he was against Suhagâ€™s appointment as Army chief.

The ban was subsequently revoked by the next army chiefÂ General Bikram SinghÂ with the concurrence of theÂ defence ministerÂ AK Antony’s,Â and he was promoted to become the commander of theÂ Eastern CommandÂ on June 16 2012.

He will serve as the army chief for tenure of two years and five months till December 31, 2016.