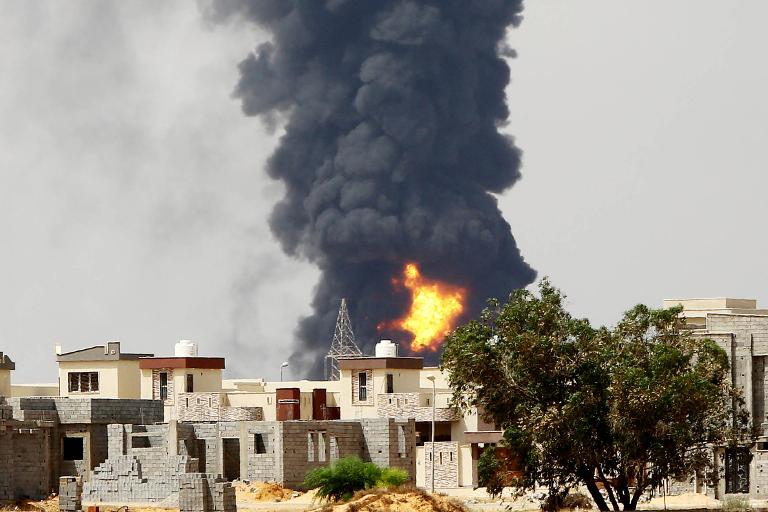 A huge blaze raged for a third day at a fuel depot near Tripoli’s airport Tuesday, while a warplane crashed in Libya’s second city Benghazi during fighting with Islamists.

Gunmen kidnapped a former deputy prime minister and newly-elected MP, Mustapha Abu Shagur, at his Tripoli home, his family said, highlighting the failure of authorities to rein in dozens of militias that sprang up during the 2011 uprising which overthrew longtime dictator Moamer Kadhafi.

Amid the increasing lawlessness and uncertainty, France, Portugal, the Netherlands, Canada and Bulgaria became the latest nations to ship out their citizens or close their embassies in Tripoli.

The blaze erupted on Sunday when a rocket fired during clashes between rival militias battling for control of Tripoli international airport struck a tank containing more than six million litres (1.6 million gallons) of fuel.

It then spread to another fuel storage site nearby on the outskirts of the capital.

The authorities warn the blaze could spread still wider to a natural gas reservoir, where 90 million litres are stored, amid fears a huge fireball could cause widespread carnage.

While the oil burns, motorists in Tripoli are suffering severe petrol shortages, as service stations have closed over fears for the safety of staff in light of the fighting.

Libya has appealed for international help, but Italy and Greece have said their involvement would be contingent on a halt in the fighting.

Rome has also denied a report by the Tripoli authorities that it was ready to send seven planes to combat the inferno.

On Tuesday, the Libyan government again called for a ceasefire in the battle for the airport that has killed around 100 people and wounded 400 since July 13.

In Benghazi, General Sagr al-Jerouchi, chief of air operations for dissident ex-general Khalifa Haftar, said it was not immediately clear if the fighter jet had been hit by gunfire or suffered a malfunction before crashing and exploding.

He said the pilot had safely ejected, which was confirmed by a witness who said he saw a parachute open before the plane crashed.

The witness said the warplane had just attacked Islamist positions.

Two weeks of fighting around Tripoli airport and between Islamists and Haftar’s forces in Benghazi have killed scores of people and prompted several countries to urge their citizens to leave Libya.

Clashes raged on Monday and resumed on Tuesday afternoon after a brief lull.

On Monday, top world leaders urged an immediate ceasefire and called on the UN “to play an essential role in facilitating the political process” to restore stability to Libya.

The clashes, the most violent since the 2011 revolt, started with a July 13 assault on the airport by armed groups, mainly Islamists.

Combat erupted Saturday when Islamists attacked the headquarters of a special forces unit near the city centre.

One of the few regular army units in Benghazi, it backs the anti-Islamist campaign launched by Haftar in May but has not placed itself under his command.

Since May, clashes have taken place in Benghazi on an almost daily basis.

France was evacuating its nationals by sea while the Netherlands and Portugal announced they were temporarily closing their embassies.

The Portuguese foreign ministry said it had already evacuated its nationals who wanted to leave and those who decided to stay did so at their own risk, the ministry added.

Canada and Bulgaria joined the diplomatic exodus on Tuesday, transporting staff to Tunis.

Other countries, including Britain, Germany and Egypt, at the weekend advised their nationals to leave immediately.

The United States for its part evacuated its embassy, citing a real risk because of fighting between troops loyal to the Libyan government and Islamists.

The exodus of foreign workers will further hit the strife-torn country, with the health ministry warning of a shortage of medical staff after the Philippines announced it was withdrawing its citizens, including 3,000 doctors and other healthcare workers.