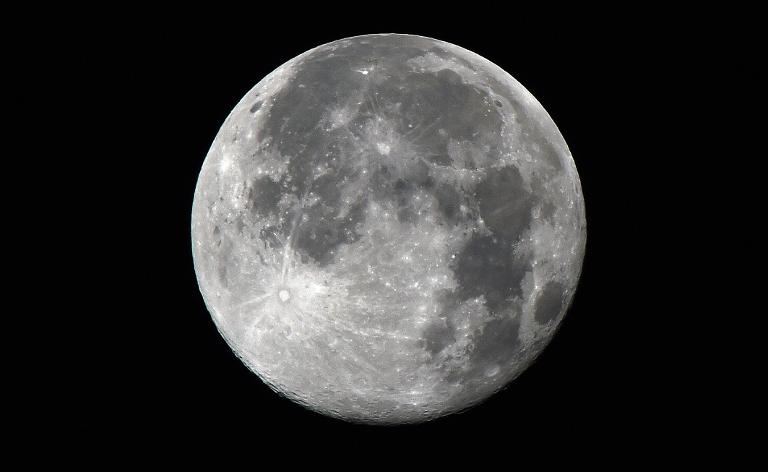 Far from being perfectly round, the Moon has a weird shape, with a highland bulge on the side facing the Earth and another bulge on its far side — a riddle that has fascinated scientists for decades.

In theory, the Moon should be a nice sphere, sculpted by rotational forces since its creation some 4.4 billion years ago.

That round shape is indeed comfortingly familiar to us on Earth when we look at a full Moon.

But if we could see the Moon from a different angle, it would look very slightly like a lemon, say astronomers.

Those giant bulges on its topography would form nubbly tips, aligned in an axis towards Earth.

How did they get there?

The answer, according to research published in the journal Nature on Wednesday, lies in mighty gravitational forces exerted by Earth during the Moon’s super-heated infancy.

Believed to be the result of an impact between a roving Mars-size planet and Earth, the Moon was initially a molten lump of rock before it started to cool and solidify.

In the same way that lunar gravity causes sea tides, Earth — with six times more mass than the Moon — exerted powerful tides on its newborn satellite during this critical period.

It squeezed and stretched the Moon, a flexing process that generated heat through friction, thus warming the semi-fluid body at a time when its surface was also cooling.

The heat from this dynamic process was not distributed universally, and the outcome had consequences for how the lunar crust formed.

“Early tides heated the Moon’s crust in different places, and those differences in heating in different areas gave the Moon most of its shape,” explained Ian Garrick-Bethell, an astrophysicist at the University of California at Santa Cruz.

“Later on, those tides warped the outside of the Moon while it was cooling, and it froze in that warped shape,” Garrick-Bethell said in an email exchange with AFP.

“It also froze in a little bit of its rotational shape at the same time.”

The tidal forces gave the Moon “a slight lemon shape” that became locked in after its crust cooled, according to the researchers.

The Moon’s asymmetrical shape may be the key to understanding some of the unusual geological events that followed, Garrick-Bethell said.

“For example, only one side of the Moon has extensive volcanic plains known as maria,” he said.

“Those are the dark parts of the Moon when you look at it at night. The other side, which you can’t see without flying over it in a spacecraft, is largely devoid of such volcanism.”

Inspiration for the team’s attempt to solve the lunar dilemma came from Europa, a moon of Jupiter which is believed to have a shell of ice on top of a layer of liquid water.

“Jupiter’s tides flex the ice shell of Europa, and cause heating in it, sculpting its shape,” said Garrick-Bethell.

“Long ago, the Moon was similar: it had a layer of rock floating on top of a layer of liquid rock. The strong, early tides from the Earth flexed this floating shell, heated it and sculpted its shape.”

An essential part of modelling the Moon’s shape was to analyse the body without its gigantic basins and craters — impacts from gargantuan rocks in its youth that flung lots of crustal material around.

The craters have long complicated efforts to explain the Moon’s shape.

But, said Garrick-Bethell, they could be stripped out of the calculations about the shape, because they were created after the cooling and solidification.