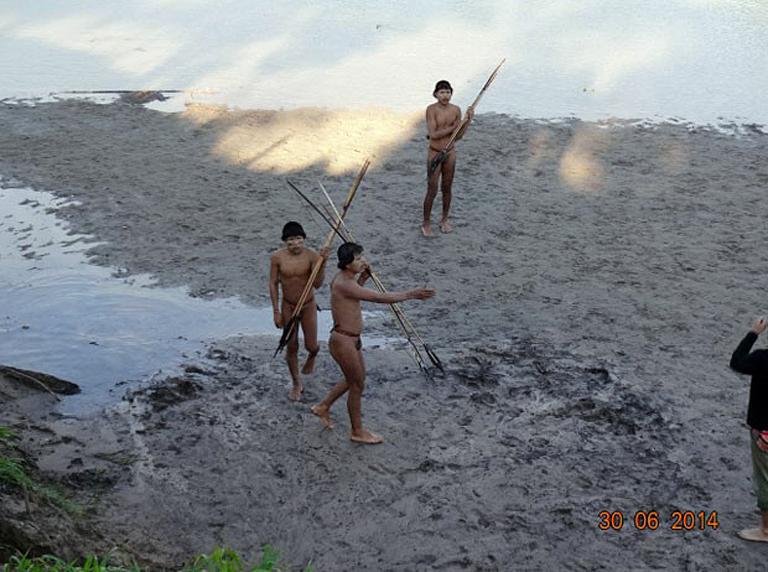 Isolated native people likely fleeing attacks in Peru have turned up in Brazil’s Amazon rainforest where they made contact with the outside world, according to a video released by the country’s indigenous authority.

The Indians, part of the “Pano” linguistic group, made contact with the Ashaninka native people of northern Brazil in late June.

The meeting was documented in a video released Tuesday by Brazil’s National Indian Foundation and which appeared in Brazil’s Globo G1 news portal. (http://g1.globo.com/ac/acre/noticia/2014/07/video-mostra-momento-de-cont…)

In one scene, an Ashaninka Indian in shorts gives bananas to two naked Indians armed with bows and arrows on the banks of the Envira River in the Brazilian state of Acre on the border with Peru.

The Indians’ encounter with the Ashaninka and a FUNAI team was filmed on the second day of contact on June 30, FUNAI said in G1.

Jaminawa Jose Correia, an Ashaninka who spoke with the Indians, said they came in search of weapons and allies.

“They described being attacked by non-native people and many died after coming down with the flu and diphtheria,” he said in G1.

FUNAI said that the group returned to the forest but came back three weeks ago because they had contracted the flu. A government medical team was sent to treat seven Indians.

Rights group Survival International said the episode was extremely worrying, considering that influenza epidemics have wiped out entire tribes in the past.

The Brazilian Amazon has the largest number of uncontacted tribes in the world at 77 FUNAI estimates.