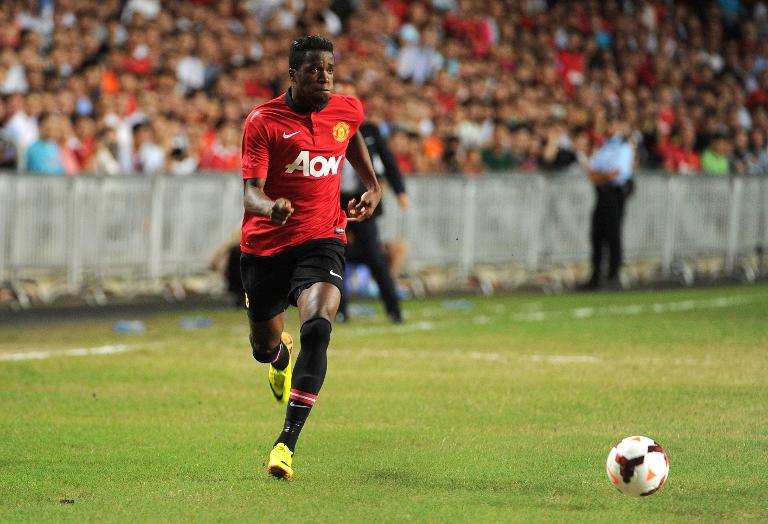 Wilfried Zaha will start at striker in the second half of Manchester United’s friendly Tuesday against Inter Milan while back Rafael da Silva has returned to England with a groin injury.

But Man United’s new Dutch field boss offered little insight on reports of a possible transfer offer for Javier “Chicharito” Hernandez from Inter or criticism by rival Manchester City that United’s pre-season look was not impressive.

“I think we do very well. I’m very pleased,” Van Gaal said. “In the competition we shall see who beats who.”

Zaha, a 21-year-old Ivory Coast product brought in from Crystal Palace last year, has been a winger but will be tested as a finisher in Van Gaal’s new 3-4-3 alignment, a formation he used with great success guiding the Dutch national side at the World Cup.

“When we play this system, he has to play as a striker or he cannot play in this system,” Van Gaal said. “I said I believe he can do the job. He believed me and now he’s performing well.”

It could be a make-or-break showing is at hand for Zaha, with stars Wayne Rooney and Robin van Persie among the others vying for time on the front line.

Both men are captaincy candidates as well, although Van Gaal said he is picking match captains on tour based on those who he will play for 90 minutes.

Colombian Fredy Guarin reportedly is being mentioned in a swap for Hernandez but Van Gaal said he was clueless.

“I don’t know nothing about that,” he said. “Is it true? Probably. I think you probably have to wait for the announcement of Manchester United. For me, I don’t know.”

Brazilian defender Da Silva suffered his injury in training before United’s win Friday over Roma and is already receiving treatment, but is a question mark for the English Premier League season opener in just 19 days.

The same attitude is in place for Shaw, who did not train with the main squad Monday due to fitness issues.

“He needs to be fit and he’s not very fit,” Van Gaal said. “Therefore, he cannot perform what I want. So first he must be fit, then he has to train.

“I’ve spoken with him. We have made a program for him. How long is that? I don’t know.”

Chris Smalling, a veteran back, said the team is catching on quickly to the new alignment.

“I like it more than the traditional 4-4-2. It allows you a lot more freedom and you can be aggressive,” Smalling said.

“Each day we’re picking it up. we are making gradual improvement. we have to keep on improving.”

Crucial to that is talking between the players.

“I think communication is the key,” Smalling said.