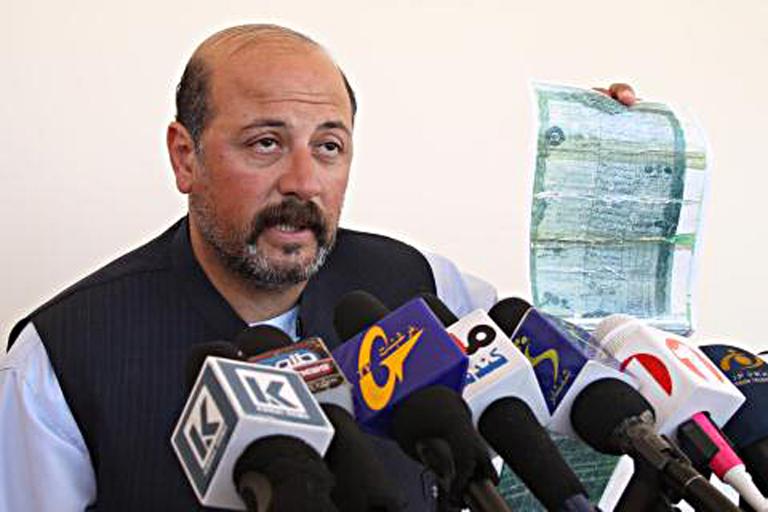 A suicide attacker killed an influential cousin of Afghan President Hamid Karzai on Tuesday, officials said, raising tensions during a dispute over election results that will determine the country’s new leader as US-led troops withdraw.

Hashmat Karzai was a campaign manager in the southern province of Kandahar for Ashraf Ghani, one of the two presidential candidates involved in a bitter stand-off that threatens to trigger worsening ethnic instability.

Hashmat, who famously owned a pet lion, was killed at his home outside Kandahar city by a man with explosives hidden in his turban as visitors arrived to celebrate the Eid holiday at the end of the Muslim holy month of Ramadan.

“After he hugged Hashmat, he blew up his explosives and killed him.”

Ghani and a former anti-Taliban resistance fighter Abdullah Abdullah are at loggerheads over the June 14 second-round election, which has been mired in allegations of massive fraud.

Ghani won the vote according to preliminary results, but an audit of the ballots has started after Abdullah refused to accept defeat due to claims of “industrial-scale” ballot-box stuffing.

With the audit beset by another outbreak of complaints from both sides, many fear the country is at risk of returning to the ethnic violence of the 1992-1996 civil war.

Ghani’s campaign team said via Twitter that it was in “immense shock” over the death of Hashmat, who — like other members of the president’s family — was a wealthy businessman and powerbroker in Kandahar.

Earlier this month, when Abdullah appeared ready to set up a “parallel government” in opposition to Ghani, US Secretary of State John Kerry flew in and brokered a deal for the complete recount of all eight million votes.

The agreement averted an immediate crisis, but US and UN officials have struggled to get Afghanistan’s first democratic transfer of power back on track as the two sides bicker over how fraudulent votes should be identified.

A credible election was seen as a key benchmark of the costly US-led military and civilian aid effort to develop Afghanistan since the ousting of the Taliban regime in 2001.

President Karzai, who has ruled since the Taliban’s fall, was due to hand over power to his successor on August 2.

Many diplomats insisted the presidential inauguration must be on schedule for future aid funding and military support, but the event has now been delayed with no new date set.

Abdullah, who draws most of his support from Tajiks and other northern groups, won the first-round vote, but results from the run-off showed Ghani, whose support base is among the Pashtun tribes of the south and east, ahead by over one million votes.

There was no immediate claim of responsibility for the killing of Hashmat Karzai, and no other casualties were reported.

Hashmat, who was about 45, first worked in the presidential election campaign for Qayyum Karzai, the president’s brother, and later moved to support Ghani when Qayyum withdrew from the race.

He ran security and vehicle import businesses in Kandahar, though was not as powerful as Karzai’s half-brother Ahmed Wali Karzai, an alleged drug king-pin killed in the city four years ago.

President Karzai is constitutionally barred from standing for a third term in office, but is likely to remain a central player in Afghan politics as government forces take on Taliban insurgents with declining help from the US-led NATO military.

Explosives hidden in turbans have been used on several previous occasions in Afghanistan, including an attack in Kabul in 2011 that killed former president Burhanuddin Rabbani.