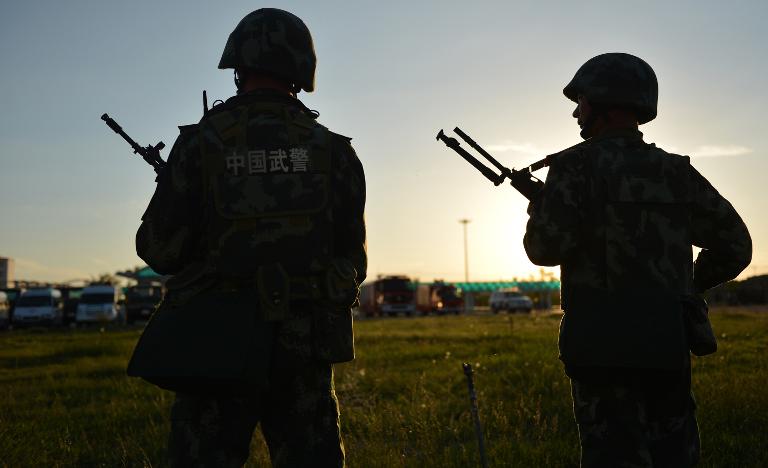 Some then moved to a nearby township “attacking civilians and smashing vehicles as they passed. Dozens of Uighur and Han civilians were killed or injured”, the report said.

“Police officers at the scene shot dead dozens of members of the mob,” it added.

More than 20 Uighur people were killed by armed authorities while 10 were injured, said Dilxat Raxit, a spokesman for the World Uyghur Congress (WUC), citing a local source.

A total of 13 armed Chinese personnel were killed and injured, he said, adding that about 67 people were arrested.

The Uighurs were “resisting China’s extreme repressive policy” when they were met with violence, he added.

It is not unusual for there to be a time lag in the official reporting of such violent incidents in Xinjiang, especially when they involve clashes with police.

Beijing commonly blames separatists from Xinjiang for carrying out terror attacks which have grown in scale over the last year and spread outside the restive region.

Among the most shocking incidents was a market attack in Xinjiang’s capital Urumqi in which 39 people were killed in May, and a deadly rampage by knife-wielding assailants at a train station at Kunming in China’s southwest in March, which left 29 dead.

The government, however, argues it has boosted economic development in the area and that it upholds minority rights in a country with 56 recognised ethnic groups.

Beijing has suggested that extremists in Xinjiang are influenced by radical groups outside China, though many foreign analysts are sceptical, pointing instead to Uighur dissatisfaction as a more likely cause.

The latest reported violence in Xinjiang comes as China has launched a crackdown following the high-profile attacks.

“She is worried that China will use this incident to strengthen repression and cause even more people to lose their freedom.”

Kadeer, who leads the WUC, was once a wealthy businesswoman but fell out with the government and was jailed before being released and moving to the United States nearly a decade ago.

In June, authorities executed 13 people, and sent more than 100 to jail in a public mass sentencing on mostly terrorism-related offences in Xinjiang.

China’s ruling Communist party is officially atheist, and for years has restricted fasting in the region.

The moves led to condemnation from the WUC.

Xinhua, in a separate report, stressed that Monday’s violence came the day before of the end of Ramadan.

“The attack is against the spirit of Ramadan, which is about the practice of self-discipline and self-control,” the agency said.

“The rioters were committing blasphemy against Islam, ‘the religion of peace.'”