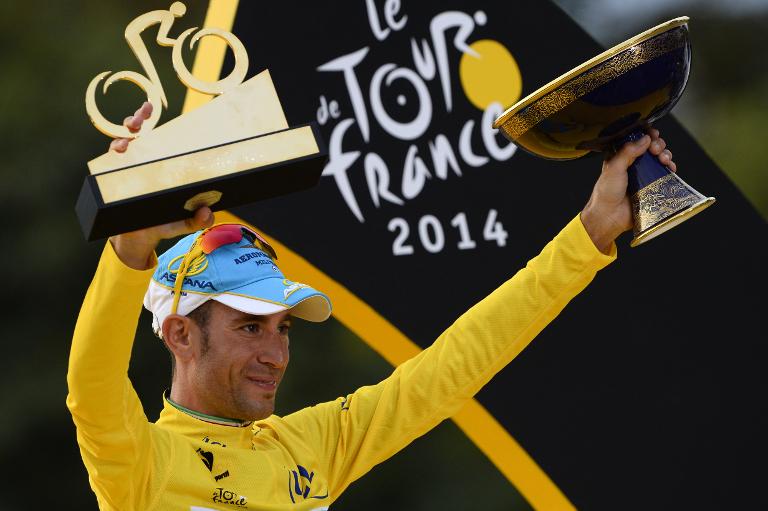 Nibali’s triumph on the Champs Elysees on Sunday concluded an eight year campaign by his Astana Pro Team — named after the Kazakh capital and funded by the country’s sovereign wealth fund — to get people talking about the world’s biggest landlocked nation.

“This has been a very successful project, if you took the mathematics, how many times Astana was named in social media and in newspapers and on TV,” said Kairat Kelimbetov, president of Kazakh Cycling, governor of the country’s central bank and a former deputy prime minister.

The team’s tribulations with drug-tainted riders and financial crises could have reinforced the reputation built by Sacha Baron Cohen’s 2006 mocking documentary “Borat: Cultural Learnings of America for Make Benefit Glorious Nation of Kazakhstan.”

The country ruled by President Nursultan Nazarbayev since independence from the Soviet Union in 1991 also struggles with a poor human rights image.

“The power of sport is very strong,” Kelimbetov told AFP in an interview after the Tour victory by the team’s star Italian rider.

“Astana is part of a big PR strategy to just give people an idea that there is a state in central Asia, that is big, the size of Western Europe, the ninth biggest in the world, and we are part of the global community,” he added.

The cycling team has made global headlines with a modest budget of $15 million (11.17m euros) a year out of about $100 million a year spent on the Astana Presidential Sports Club, according to Kelimbetov.

And the Club aims to make itself seen and heard even more in cycling and other sports.

The Club has seven professional sports teams, including a $50 million a year ice-hockey squad and a football team, all with the aim of “projecting a positive image” of Kazakhstan abroad and encouraging sport at home.

“It is like a Real Madrid in Kazakhstan,” said Kelimbetov.

The cycling team was set up in 2006, just as “Borat” was being released, though Kelimbetov said there was no link between the two.

The club was set up to support Kazakhstan’s star rider Alexander Vinokourov who won the Tour of Spain that year for the team.

But soon after he was involved in a doping scandal in 2007 that led to a two year ban.

Astana later signed Alberto Contador who won the Giro d’Italia and Vuelta a Espana in 2008. In 2009, seven-time Tour de France winner Lance Armstrong came out of retirement and joined Astana.

Contador won the 2010 Tour de France but had the title taken away after failing a drug test. Armstrong, later stripped of his record seven Tour de France titles for doping, left that year in a dispute over the return of Vinokourov.

That was when Kelimbetov took control to sort out its finances and its scandals. The team set up a programme with cycling’s governing body, the UCI, to avoid doping violations.

“Actually Astana was probably the first team who really started five years ago to clean up the house and we are now following all these rules,” he said.

Kelimbetov said that before his arrival, the authorities had considered closing the cycling team.

As a leading voice on the Astana Presidential Sports Club, Kelimbetov said it was determined to prove that Nibali was not a one-off. “We would like this to be a long sporting story,” he said.