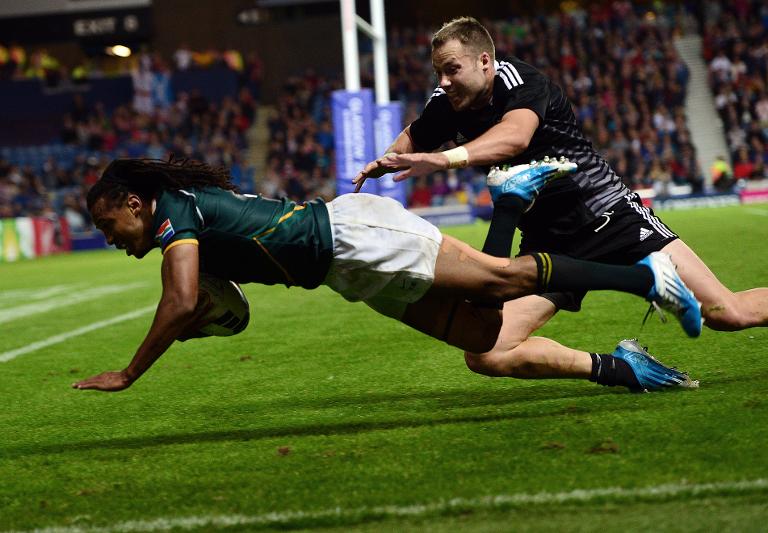 The Springboks clinched a nail-biting 17-12 final victory at a packed Ibrox Stadium thanks to tries from Seabelo Senatla (2) and Cecil Afrika and a conversion by Branco du Preez.

New Zealand, whose winning streak stretched back to a Jonah Lomu-inspired side that won gold in Kuala Lumpur in 1998, scored two tries through Sherwin Stowers and Joe Webber, Gillies Kaka nailing one conversion.

“This feeling is the greatest,” said Afrika. “We as South Africans are so proud. Rugby is our national sport, we always strive to be the best in the world.

“The Commonwealth Games is a one-off tournament. As a squad we want to take this forward to the Rio Olympics.”

Australia took bronze with a 24-0 win over Samoa.

Ndiku, the world indoor 3000m champion, made the most of the absence of injury-hit Olympic champion Farah to win the first gold medal on offer at the Hampden Park track.

With his hair dyed gold in expectation of victory, Ndiku triumphed in 13min 12.07sec with teammate Isiah Koech claiming silver in 13:14.06.

In the women’s marathon, Daniel, the winner in Paris this year, led teammate Caroline Kilel to a convincing Kenyan one-two.

The weight of the Caribbean island’s expectations are resting squarely on Ashmeade’s shoulders in the absence of Bolt, who will compete solely in the relay in Glasgow after an injury-plagued season.

In the women’s 100m heats, Jamaica’s Veronica Campbell-Brown looked slick in winning in 11.29sec and she will be joined in the semi-finals by teammates Schillonie Calvert, who clocked the same time in nailing her heat, and Olympic silver medalist Kerron Stewart (11.35).

It was also another successful night for England as Siobhan O’Connor and Fran Halsall secured gold in the 200m individual medley and 50m butterfly respectively.

Magnussen edged out fellow Australian Cameron McEvoy in a highly anticipated clash, although the winning time of 48:11sec didn’t live up to expectations.

There was more gold and silver for Australia as Belinda Hocking held off teammate Emily Seebohm to win the women’s 200m backstroke.

Ben Treffers and Mitch Larkin led home a third Aussie one-two in the men’s 50m backstroke ahead of defending champion Liam Tancock of England in third.

And Australia made it four golds from four in the relays as the men’s 4x200m freestyle team held off an impressive challenge by Scotland and South Africa, who finished in second and third respectively.

Australia finished top of the medal table in track cycling as they claimed another two golds.

Matthew Glaetzer claimed gold in the men’s keirin to seal a successful track campaign for Australia who won 20 medals including seven golds.

It was a good day for England with Laura Trott shrugging off a kidney infection to win the 25km points race and end Australia’s run of four successive wins in the event.

In shooting, England claimed both golds through Charlotte Kerwood in the women’s double trap and Steven Scott won the men’s event.

Sathish Sivalingam won the men’s 77kg weightlifting title to keep India on top of the medals table ahead of Nigeria for whom Olauwatoyin Adesanmi won the women’s 63kg gold.

Malaysia’s world number one Nicol David secured her place in the final of the women’s squash final and will face world champion Laura Massaro for the gold on Monday.