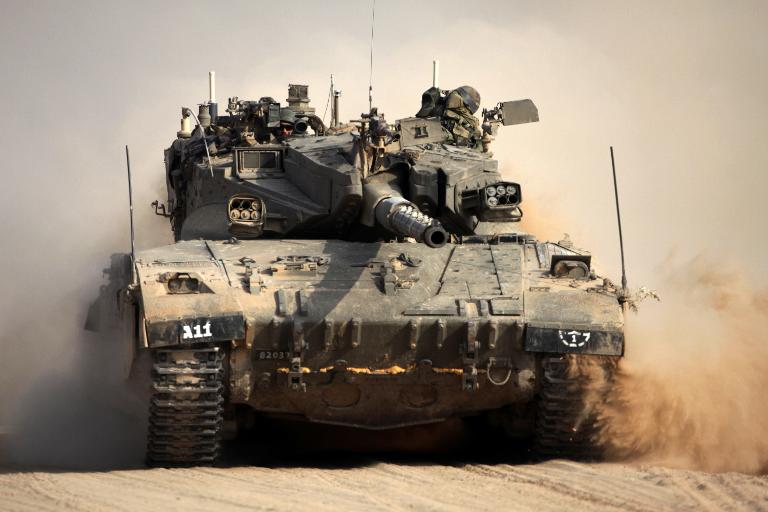 Fighting subsided in war-torn Gaza Monday at the start of the Muslim holiday of Eid al-Fitr as world powers ramped up pressure on the warring sides to immediately end their 21-day confrontation.

Following increasingly urgent calls by the UN and the US for an “immediate ceasefire,” a senior source in the West Bank said Palestinian president Mahmud Abbas was heading to Cairo along with representatives of Hamas for fresh talks on ending the violence in Gaza.

“Abbas is forming a Palestinian delegation including Hamas and Islamic Jihad representatives to meet Egyptian leaders and discuss a halt to Israel’s aggression against Gaza,” the source told AFP, without saying when the talks would take place.

“The aim is to examine with Egyptian leaders how to meet Palestinian demands and put an end to the aggression,” he said.

As diplomatic efforts intensified to broker an end to the bloodletting which has claimed over a thousand lives, both sides appeared to have settled into an undeclared ceasefire arrangement with the skies over Gaza mostly quiet.

Military spokesman General Moti Almoz described the calm as “an unlimited lull” but warned that the army was ready to resume its activity at any time.

The army said two rockets had struck Israel since midnight (2100 GMT) while in Gaza, an AFP correspondent confirmed there had been no overnight air strikes, although sporadic raids resumed in the afternoon with a 4-year-old boy and another person killed by tank shelling near the northern town of Jabaliya.

Another three succumbed to their wounds overnight, raising the death toll in Gaza to 1,037.

There was little mood for celebration in Gaza City as the three-day festival of Eid al-Fitr that ends the holy fasting month of Ramadan got under way.

Several hundred people arrived for early-morning prayers at the Al-Omari mosque, bowing and solemnly whispering their worship. But instead of going to feast with relatives, most went straight home while others went to pay their respects to the dead.

Among them was Ahed Shamali whose 16-year-old son who was killed by a tank shell several days ago.

“He was just a kid,” he said, standing by the grave. “This is the Eid of the martyrs.”

“After the destruction and war we’ve seen here, there’s no Eid for us now,” said a 44-year-old man who gave his name only as Issa.

Meanwhile in Jerusalem’s Al-Aqsa mosque, some 45,000 worshippers rallied in support of war-torn Gaza as they gathered for the Eid prayers, police and an AFP correspondent said.

“Our blood for Gaza,” they chanted, many of them wearing black T-shirts emblazoned with logos reading: “Gaza, supporting you is our Eid” and “We are all Gaza.”

Early on Monday, the UN Security Council appealed for both sides to accept an “immediate and unconditional humanitarian ceasefire” to permit the urgent delivery of aid, in a non-binding statement which elicited disappointment from the Palestinian envoy.

The UN statement came after Obama phoned Netanyahu to stress “the strategic imperative” of implementing an immediate humanitarian truce.

Despite the relative calm on the ground, a diplomatic row was brewing between Israel and Washington over US efforts to end the violence, which on Friday saw the Israeli cabinet unilaterally rejecting a truce proposal laid out by US Secretary of State John Kerry.

“Very senior officials in Jerusalem described the proposal that Kerry put on the table as a ‘strategic terrorist attack’,” Ari Shavit wrote in Haaretz, saying the anger was over his decision to reportedly formulate an initiative along the lines proposed by Hamas allies Turkey and Qatar.

The decision “to go hand in hand with Qatar and Turkey, and formulate a framework amazingly similar to the Hamas framework, was catastrophic. It put wind in the sails of Hamas’ political leader Khaled Meshaal,” he said.

“Israel was very close last night to a decision to announce a unilateral ceasefire,” wrote Nahum Barnea in the top-selling Yediot Aharonot.

“And then came Obamaâ€™s telephone call to Netanyahu, and the tension between the Israeli government and the US administration turned into a crisis, which is now threatening to disrupt the path to a ceasefire,” he wrote.