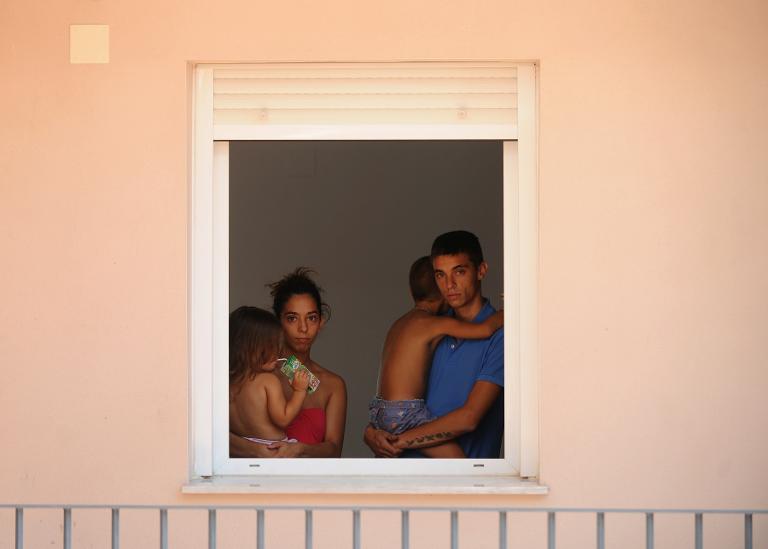 Unable to pay her mortgage, Manoli Herrera turned over her flat to the bank and moved into one of six abandoned buildings occupied by other jobless families in Sanlucar de Barrameda, a seaside town on SpainÂ´s southern coast.

“I did not want my two children to experience the violence of an eviction. They have already gone through so much,” she said as her children played in the courtyard of the occupied building.

Twenty struggling families, many with children, moved into the building on June 30.

Several days later another 60 families moved into five nearby buildings.

The six new buildings belong to a real estate developer that went bankrupt and disappeared.

A message written on a white bedsheet that hangs from the courtyard of one of the occupied reads: “Everyone has the right to a home. Fighting for a home.”

The occupied buildings have been dubbed “The Courtyards of Dignity”. The name was inspired by the high-profile occupation of another building in May 2012 by about 20 families aided by anti-poverty activists in Seville, about 100 kilometres away that was called “Utopia Courtyard”.

The authorities evicted those families from that building in April.

Herrera, 39, said she lost her job in 2009 when the company she worked for went bankrupt.

With her husband also out of work, the couple eventually stopped paying their mortgage.

After missing three monthly mortgage payments the bank told the couple they had two options: turn over the home to the lender, or be evicted and be liable for the 86,000 euros ($116,000) they still owed.

They are part of a surge in the number of indebted Spanish families that have lost their homes since a decade-long property bubble burst in 2008, throwing millions of people out of work.

While evictions have soared, the collapse of the property bubble has left an estimated 700,000 empty new homes scattered across Spain — which are often the target of squatters.

“The ‘courtyards’ are a reflection of the social situation. They highlight the problem of the housing emergency that exists which the authorities try to hide,” said Francisco Cuevas of the CNT union who regularly brings food for the residents of “The Courtyards of Dignity”.

Sanlucar de Barrameda, a town of whitewashed houses that is now home to around 65,000 people, boasts nearby beaches that are a popular tourist draw. But few holidaymakers are aware of the occupation of the buildings in the city and the residents struggling to make ends meet.

Families in the six buildings rely on food donations and share whatever they have.

“United we are stronger. What we want are solutions for everyone. Not in drips and drabs,” said Juan Jose Munoz, a spokesman for the squats.

Before moving into the occupied buildings, Jenifer Garcia Vidal, 22, and her husband Esteban and two children, aged four and five, lived with her parents.

“We were nine people in two rooms, it was unbearable,” she said as he held her daughter in her arms.

The occupation of the buildings is a thorn in the side of local authorities.

“We can never support kicking down a door” to illegally enter an empty building, said the town’s Socialist mayor, Victor Mora.

The left-wing regional government of Andalucia, where the town is located, in April 2013 passed a decree that allowed it to expropriate properties from which people are about to be evicted for up to three years to allow them to continue to live there.

But the measure was blocked by the conservative national government of Prime Minister Mariano Rajoy.

Last week, the government of Andalucia announced it had reached a deal with a bank to turn 20 empty flats in the lender’s hands into social housing.

But “this is a drop of water in the ocean,” said Munoz.