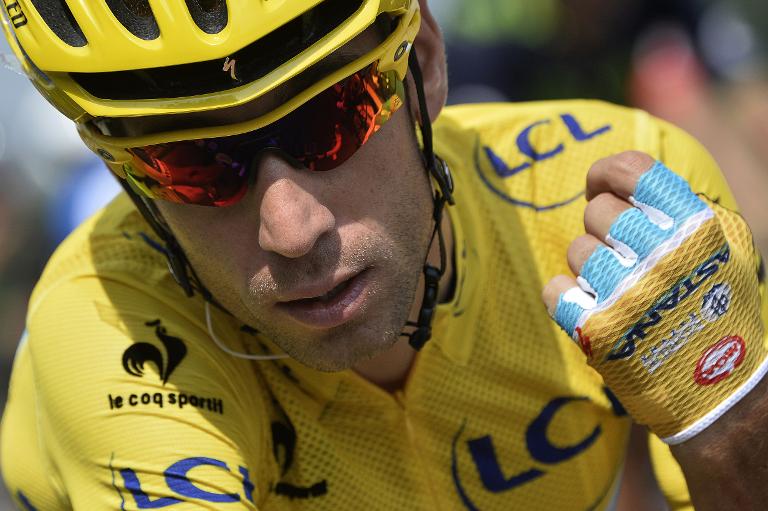 Vincenzo Nibali fought back tears as he stood on the Tour de France winner’s podium and described the moment as better than he ever expected.

Nibali completed his victory at the 2014 Tour by finishing safely in the pack on Sunday’s 21st and final stage from Evry to Paris, won by German Marcel Kittel.

“It’s the most important and the best moment, I never imagined it could feel this good because when you find yourself on this podium on the Champs Elysees, it’s unique,” said Nibali, reading a prepared statement.

“Now that I’m here it’s even better than I imagined. I fought for this every day, I started building from a long way out with a winter preparation with the team because we had decided this was our objective.

“Some people might think it’s normal but I want to thank my (Astana) team because when you achieve an objective, you do so together, not just those here with me but also those back in Italy.

“It’s a success that I want to dedicate to all the staff in the team and to my family, my wife Rachelle and my daughter Emma.

“If it hadn’t been for my parents who have supported me since the beginning then I wouldn’t have been here.

After crossing the finish line, Nibali went straight up to his wife and baby to embrace both.

The Giant-Shimano sprinter thus equalled his feat from last year when he also won four stages — including both the first and last — and wore the yellow jersey for a day on stage two.

In the final sprint he initially looked to have been caught and passed by Alexander Kristoff before finding a second wind to power through and win.

“It was actually my strategy for the sprint,” said Kittel.

“I was meant to start not too early so when Kristoff passed me he had already had a little more time to accelerate and gain more speed.

“That was the reason why I was a bit behind him but then I could really start my sprint and accelerate and I noticed the moment when Kristoff couldn’t go faster any more.

“That was the moment to pass him again. It was close, there was a moment I thought it really wasn’t enough at the end but I’m super happy.”

Kittel, 26, paid tribute to his lead out team who put him in the position to win with 300m left.

“It’s incredible, I’m really proud of all the team. The guys worked really hard today, they put me in a perfect position,” he added.

“It’s been a great Tour in our team, and I don’t forget my teammate (Ji Cheng) who fell, but we’ll celebrate tonight.”

The day’s events started, as ever for the processional final stage, at a pedestrian pace as Nibali sipped champagne with his teammates and posed for photos with the other jersey winners.

Slovakian Peter Sagan won the green sprinters’ points jersey for the third year in a row while young Pole Rafal Majka claimed the king of the mountains polkadot jersey.

While Ji, who crashed on the cobbles along the Champs Elysees and was even lapped as the peloton made eight circuits around the famous Parisian avenue, achieved more than just becoming the first Chinese rider to compete at and indeed finish a Tour.

He came 164th and last but also managed the largest gap between first and last since 1954, finishing 6hr 02min 24sec behind Nibali.