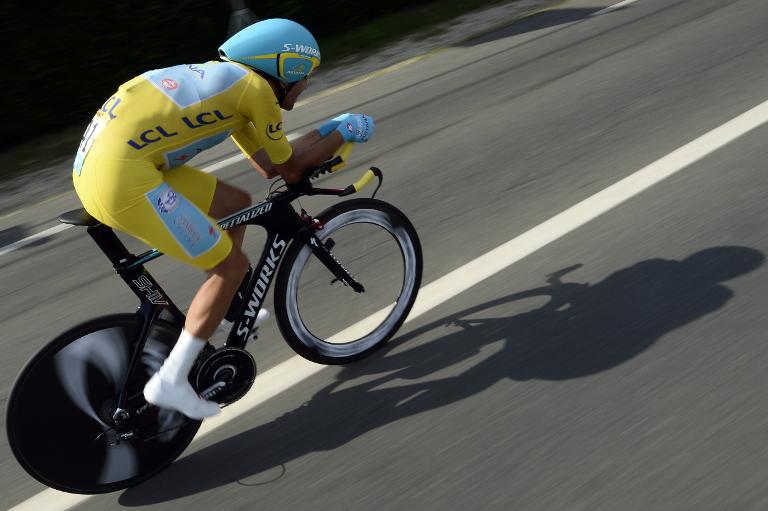 Barring a final stage catastrophe on Sunday, Astana rider Nibali is assured of winning his first Tour title on the Champs Elysees as he takes an impressive 7min 52sec lead to Paris.

It is the first Tour victory by an Italian since Marco Pantani in 1998.

But for the rider nicknamed “The Shark” his achievement was taking time to sink in.

“I haven’t even thought about it yet, I’ve always thought about giving my maximum and not about what I might achieve or records or entering into Tour history,” he said.

“I just thought about getting to the end of each stage and getting on my bike because that’s what I like the most.”

Three-time world time trial champion Martin was peerless in his speciality as he finished a huge 1min 39sec ahead of the rest, clocking an impressive time of 1hr 06:21.

Dutch time trial champion Tom Dumoulin was second with Czech Jan Barta third at 1:47, ahead of Nibali who was fourth at 1:58.

It was Martin’s second stage win of the Tour and the third for his OPQS team.

“I’m really happy, it was my day that’s true. The time trial is my discipline.

“I didn’t expect to win the first stage so to be able to win two is great.

“I was well prepared for the time trial as yesterday (Friday) I kept something back because I knew I would have to give everything the next day.”

The 29-year-old said he had felt the pressure of being the overwhelming favourite but said he simply had a great day.

“That’s the hard part for me (being favourite) because it puts a lot of pressure on my shoulders,” he said.

“I really had to handle this pressure but I’ve learnt in the past how to do that.”

But it was the battle for podium places behind Nibali, who assured he will wear the yellow jersey after Sunday’s final stage to Paris, that was most gripping.

French riders Thibaut Pinot and Jean-Christophe Peraud and Spaniard Alejandro Valverde had started the day separated by just 15sec ensuring the fight for second and third place would be epic.

Yet Spanish time trial champion Valverde had an off day and faltered badly.

Peraud, the 2009 French champion against the clock, comfortably overhauled his 13sec deficit to Pinot despite suffering a puncture along the way.

He had already turned his 13sec deficit into a 12sec lead by the first time check after 19km.

But the 37-year-old punctured after 33km and at the second time check 6km later he’d lost a couple of seconds.

Pinot, who also claimed the white jersey for best young rider at the Tour, was nonetheless delighted to finish third having been 10th at the Tour two years ago.

“I was already happy with the white jersey but now a podium too is extra special,” he said.

“It hasn’t sunk in yet. I have no regrets, three weeks ago I would never have believed I could finish third so it’s just joy and bodes well for the future.”

Pinot had widely been assumed to be weaker than Peraud and Valverde in the time trial, which he said had helped take the pressure off him.

“I was confident from the start, I knew I was capable of putting in a good time trial. I’ve been doing good time trials all season so there was no reason not to expect to do a good one at the Tour de France.

“This morning was the stage in which I felt the least pressure. Everyone thought I’d lost the podium so I could only create a surprise.

“There was no pressure and I felt relaxed.”

Peraud was so emotional at the end he could barely speak and quickly gave up trying.