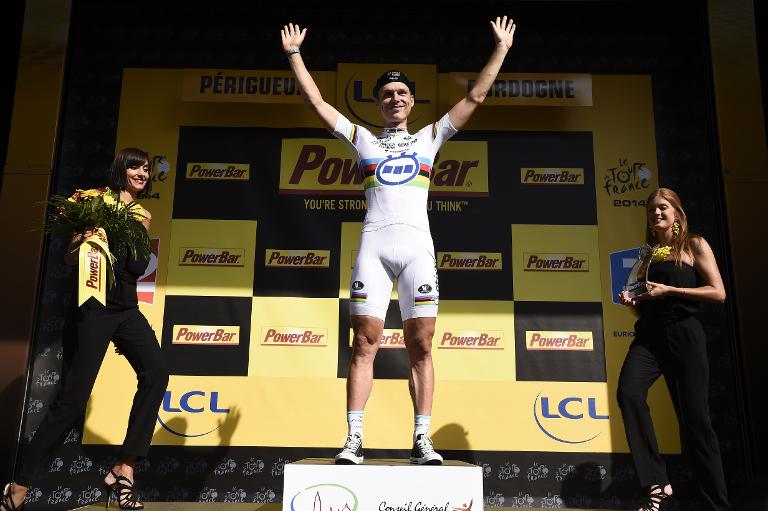 Tony Martin said he would have been tough to beat even if the best timetriallers in the world had been at the Tour de France on Saturday.

He distanced Dutch time trial champion Tom Dumoulin by 1min 39sec in second with Jan Barta, twice the Czech champion of the race against the clock, at 1:47.

But the three-time world champion said things might have been tighter had other top timetriallers been there, although he would still have won.

“A lot of guys couldn’t start today from the real contenders like Bradley Wiggins and Fabian Cancellara,” he said.

“To be honest I made a really good race today, my condition was really good, I still have power after three weeks.

“It’s really hard to say but I think today it would have been hard for anybody to beat me.”

Even so, Martin was surprised by the size of his victory.

“I’m a little surprised, after three weeks of the Tour de France I expected to be a little bit more tired and I thought many others would finish closer, but right from the start I had a good feeling and I knew it could be my race today,” he added.

Dumoulin said he had done the best possible for him as beating Martin would have been a step too far.

“It was long and hard, especially after three weeks,” he said. “Tony Martin is at another level. On such a long time trial, it’s impossible for me to beat him.”

Barta felt he had made a tactical error, although he was happy with his showing.

“I rode a good time trial but I was a little bit too fast in the first part,” he said.

Vincenzo Nibali as good as wrapped up his overall victory by coming home fourth on the stage and extending his lead to second placed Jean-Christophe Peraud to 7:52.

With only Sunday’s processional 21st stage to Paris to come, only a disaster will stop Nibali adding his name to the Tour roll of honour.

“It’s a special and important victory for me, for my team, my career, my family and all the sacrifices I’ve made,” he said.

“The team (Astana) gave me the chance to build a group just for me for the Tour to try to win it.

“A team needs many other elements such as coaches, masseurs, physios and everything needs to work perfectly.

“I left home at only 15 years of age so to achieve this success means all the sacrifices have paid off.”

Behind Nibali, Peraud overturned a 13sec deficit to Thibaut Pinot despite suffering a puncture.

He was seventh on the stage while his young French compatriot Pinot came 12th to secure a podium place ahead of Spaniard Alejandro Valverde.

The 37-year-old Peraud, who was ninth in 2011, admitted he could not normally have hoped for such a high finish but said this was reward for his hard work.

“It’s an enormous satisfaction. The withdrawals of (Chris) Froome and (Alberto) Contador opened a range of possibilities and I started dreaming about this second place,” he said.

“I’m happy to have achieved that goal. I have a feeling of mission accomplished and a lot of joy today.”

“I was aware throughout the stage that I was losing the podium. I tried to do well but my body didn’t respond,” he said.

“When you give it everything, you can’t have regrets. But I’m happy, fourth at the Tour de France is a good result.

“The Tour is important but it’s not the only race. I’ll go to the Vuelta with ambitions too.”