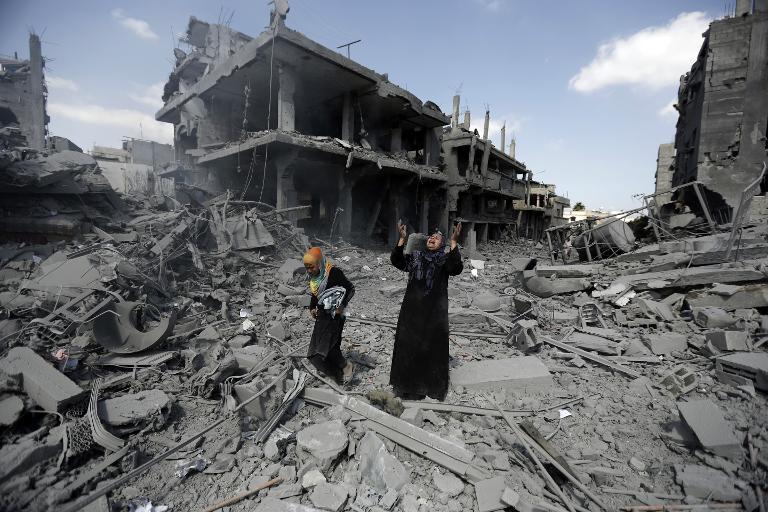 Israel is extending a lull in its devastating Gaza offensive for another 24 hours, officials said, but Hamas resumed rocket fire and warned no ceasefire was valid without the withdrawal of Israeli tanks.

However Hamas responded in a statement that “no humanitarian ceasefire is valid without Israeli tanks withdrawing from the Gaza Strip and without residents being able to return to their homes and ambulances carrying bodies being able to freely move around in Gaza”.

Late Saturday the Ezzedine al-Qassam Brigades, the military wing of Hamas, claimed responsibility for rocket attacks on southern Israel and Tel Aviv immediately after the expiry of an initial 12-hour ceasefire both sides had abided by.

The attacks, which set air-raid sirens wailing throughout the country, were confirmed by the Israeli army.

Overall about 20 rockets were fired at southern Israel between late Saturday and Sunday morning.

The Iron Dome missile interception defences knocked some rockets out of the sky, and no casualties were reported.

Israeli artillery responded by opening fire in the Rafah area in the southern Gaza Strip, on positions from where the rockets were launched, an army spokeswoman told AFP.

Israel’s unilateral decision to continue the ceasefire signalled a pause in its assault on Gaza, which since July 8 has killed more than 1,000 Palestinians.

Over the same period, 42 Israeli soldiers deployed into Gaza have been killed, according to the latest military toll. Three civilians in Israel also died.

The deadly confrontation spurred calls from around the world for both sides to extend the ceasefire to enable negotiations for a longer-term truce.

Israel’s security cabinet was to meet Sunday morning to decide the next steps in the military operations.

In Paris, US Secretary of State John Kerry met European and Middle Eastern foreign ministers Saturday to push both sides to extend the temporary cessation of hostilities.

Israel agreed to extend its ceasefire for four hours, and then announced the 24-hour prolongation to late Sunday.

“We all call on parties to extend the humanitarian ceasefire,” France’s Foreign Minister Laurent Fabius told reporters in Paris after the meeting with Kerry and counterparts from Britain, Germany, Italy, Turkey and Qatar, as well as an EU representative.

A spokesman for the UN chief said in a statement Ban Ki-moon “urgently appeals once again to all parties to declare a seven-day humanitarian ceasefire in Gaza”.

During Saturday’s 12-hour ceasefire, medics digging through the remains of hundreds of Gaza homes uncovered at least 147 bodies.

On the ground, Palestinian ambulances sped into Gaza neighbourhoods that have been too dangerous to enter for days.

Palestinians ventured onto Gaza’s streets after the truce began, some eager to check homes they had fled, others to stock up on supplies.

In many places they found devastation: buildings levelled, and entire blocks of homes wiped out by Israeli bombardment.

In northern Beit Hanun, the hospital was badly damaged by shelling, and AFP correspondents saw the charred body of a paramedic.

There were similar scenes in Shejaiya, where stiff bodies lay on the floor of a room in one building, one caked in dried blood, all of them covered in dust.

And in nearby Bani Suheila, where 20 people were killed in a single Israeli air strike shortly before the truce began, women and children wept as they discovered their homes destroyed.

Hamas and Israel agreed to Saturday’s 12-hour “humanitarian window”, after Israel’s security cabinet on Friday night rejected a US proposal for a seven-day truce during which the two sides would negotiate a longer-term deal.

Speaking at a news conference in Cairo with UN chief Ban after the rejection, Kerry said Israel and Hamas “still had some terminology” to agree to on a ceasefire, but added they had a “fundamental framework” on a truce.

The two sides remain at odds over the shape of a final agreement to end the fighting, however.

Hamas says any truce must include a guaranteed end to Israel’s eight-year blockade of Gaza, while in Israel there are calls for any deal to include the demilitarisation of the Gaza Strip.

The situation in Gaza has created tensions in the West Bank, where protests against Israel’s role in the conflict erupted after Friday prayers and again early Saturday, with a total of eight Palestinians shot dead by Israeli soldiers and settlers.

International concern has mounted over the civilian toll in Gaza.

Rights groups say about 80 percent of the casualties have been civilians. UNICEF, the UN agency for children, has said 192 children have been killed during the latest conflict so far.