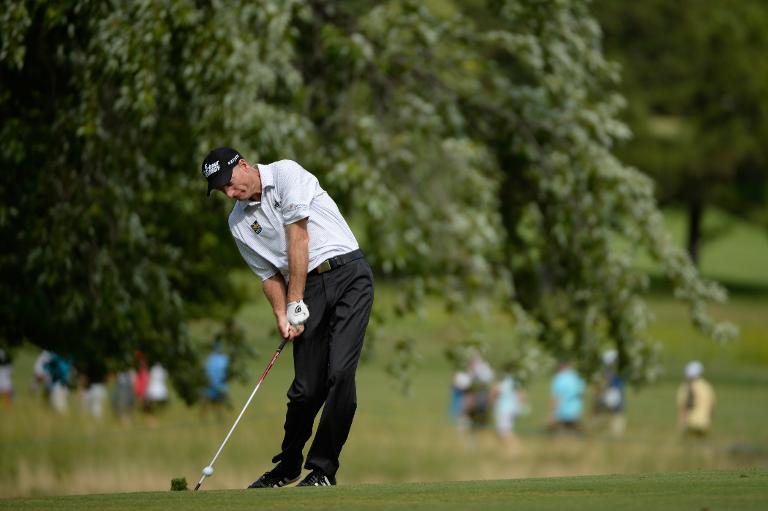 Jim Furyk closed in on a third Canadian Open crown, firing a five-under 65 for a three-shot, third-round lead in the US PGA Tour event.

Furyk had five birdies and no bogeys on the par-70 Royal Montreal Golf Club’s Blue Course for a 54-hole total of 15-under par 195.

He was three strokes clear of South African Tim Clark, who played his way into contention on 198 with a six-under 64 that included four birdies and an eagle two at the par-four second hole.

After two pars to start his round, Furyk landed his approach at the third within three feet and tapped in for birdie.

He followed with a 23-foot birdie putt on the fourth.

Furyk nearly holed his second shot at the ninth coming away with another birdie, then added two more birdies coming in at 12 and 14.

“I played pretty well. You know, I felt like yesterday obviously shooting 63 I was happy with how everything went,” Furyk said. “I hit the ball well, I scored well, and got the ball in the hole.”

Clark opened with a birdie at the first, then holed out from the fairway at the second.

“You dream of a start like that, and after that I continued to play some pretty solid golf,” Clark said. “I was struggling a little bit with my ball striking at the start of the year, then I found it a few months ago … and now finally the putts are starting to go.”

American Kyle Stanley was alone in third place after a 68 for 200, with compatriot Jamie Lovemark a further stroke back on 201 after signing for a 67.

Graham DeLaet was the top Canadian, carding an even par 70 to join a group sharing fifth place on 202, alongside Americans Joe Durant, Scott Brown and Tim Petrovic — who shared the overnight lead with Furyk.

DeLaet is trying to end a 60-year victory drought for Canadian golfers in their home open.

Furyk, coming off a fourth-placed finish at the British Open at Hoylake last week, is seeking his first PGA Tour title since 2010.

The 44-year-old owns 16 career titles, including Canadian Open triumphs at Hamilton in 2006 and Angus Glen in 2007.

Sunday’s final round will get off to an early start due to the threat of thunderstorms.

Players will start from two tees in groups of three, organizers said, in hopes of completing the round.