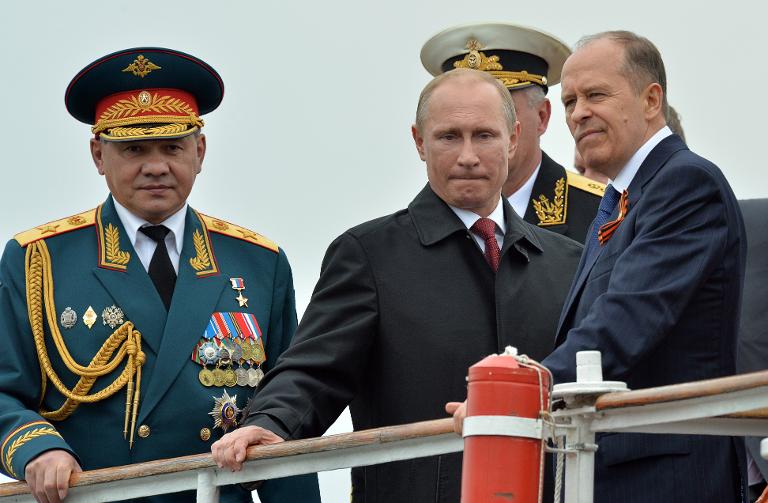 Spurred into action by the shooting down of Malaysia Airlines flight MH17, the EU put Russia’s intelligence chiefs on its sanctions list Saturday as it readied much harsher measures against Moscow over the Ukraine crisis.

The director of the FSB security service, Alexander Bortnikov, and the head of the Russian Foreign Intelligence Service, Mikhail Fradkov, were among 15 people and 18 entities hit with asset freezes and visa bans, the EU’s Official Journal said.

Bortnikov and Fradkov, both members of the Russian Security Council, were included for their part in “threatening the territorial integrity, sovereignty and independence of Ukraine,” it said.

Among other figures was Chechen President Ramzan Kadyrov, who offered to send troops to support the pro-Moscow rebels in eastern Ukraine accused of shooting down flight MH17 with a Russian-supplied missile.

The entities included rebel militias and authorities in Ukraine, plus companies said to have helped and profited from Moscow’s March annexation of the Crimean peninsula which is home to Russia’s Black Sea fleet.

Russia has consistently derided US and EU sanctions as ineffective, counterproductive and harmful to important shared interests, especially in the face of growing terrorist threats and global instability.

On Saturday, it repeated the message.

The EU “has practically speaking put at risk international cooperation in the area of security,” the Russian foreign ministry said.

With Saturday’s announcement, a total of 87 people and 20 entities have been hit with “Phase 2” asset freezes and visa bans by the European Union as it prepares to adopt broader “Phase 3” measures targeting key economic sectors.

The 28 member state ambassadors to the EU agreed Friday the legal instruments for implementing the new measures, which cover four areas — access to capital markets, defence, dual-use goods and sensitive technologies, including in the energy sector.

The ambassadors and officials will continue discussions over the weekend and Monday, aiming for final clearance at another meeting Tuesday.

Normally, EU leaders would meet at that point to give political approval but European Council president Herman Van Rompuy has asked them in a letter to fast-track the process by having their ambassadors sign off on the new measures.

German Foreign Minister Frank-Walter Steinmeier has urged all EU countries to quickly adopt economic sanctions against Russia, which would “send a necessary and clear message to Moscow”.

“We want some targeted rules which can be quickly reinforced,” Steinmeier said, according to an extract from the German weekly Der Spiegel released on Saturday.

Up to now, the fact that many member states have major economic ties with Russia has made the EU reluctant to adopt the tougher economic sector measures backed by Washington, but the shooting down of MH17 with the loss of nearly 300 lives has clearly changed the thinking.

EU officials said it was likely the new sanctions will limit access to the long-term capital markets, making it more difficult for Russian companies to raise fresh funding and putting the economy under even more pressure.

In his letter, Van Rompuy said such measures would have “a strong impact on Russia’s economy” but only a “moderate effect” on a still recovering European economy.

In the technology sector, sanctions will apply to the oil sector but not gas, of which Russia supplies about a third of the EU’s needs, Van Rompuy said, highlighting the need to guarantee the bloc’s energy security.

Some EU members like Hungary are opposed to severing commercial ties with Russia, especially over energy supplies.

Hungarian Prime Minister Viktor Orban said Saturday that while he supported Ukraine he had to think of his country’s interests which could include Russia’s controversial South Stream gas pipeline project.

“If the South Stream gas pipeline must pass through our country in order to maintain good business relations with Russia, then we are clearly for South Stream,” he said on a visit to Romania, local media reported.