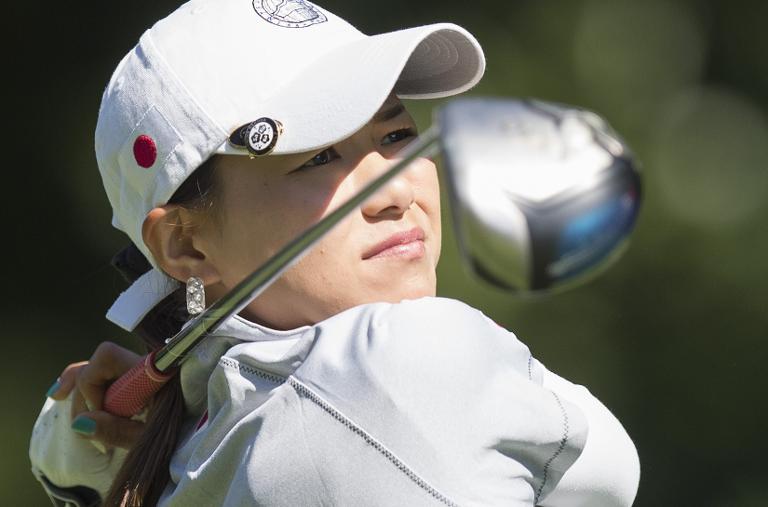 Sakura Yokomine sank a 15-foot par putt at 18 to complete an astonishing fightback and keep Japan undefeated and atop the field Friday at the LPGA International Crown matches.

Standing 6-down with seven holes to play, Yokomine and Ai Miyazato rallied to split two points with Australia’s Katherine Kirk and Lindsey Wright.

“Oh my God. It feels amazing,” Miyazato said. “We kept making birdies to give ourselves a chance.

“We said we had to keep it going. We didn’t know what was going to happen. We just kept a positive attitude.”

Mika Miyazato and Mamiko Higa also rallied in a 3-and-2 win over Karrie Webb and Minjee Lee. Webb birdied the third but Higa birdied to win the next three holes and 11 as well in the victory.

That gave lone unbeaten Japan the lead in the eight-team event with two wins and two halves for six points. Thailand were next on five points and Taiwan, South Korea and the United States all had four points entering Saturday’s final four-ball matches.

Spain, Sweden and Australia trail with three points each and need wins as only five teams advance to Sunday’s singles matches. Overall point totals will decide the winner in the $1.6 million showdown for global bragging rights at Caves Valley.

Saturday’s matches feature Japan versus South Korea, United States versus Thailand, Spain against Taiwan and Sweden against the Aussies.

Kirk and Wright went 5-up after seven holes and appeared set for a blowout win before the match was put on the clock after Yokomine birdied to win 12.

“We lost our timing and that was pretty much it,” Wright said. “We just lost our rhythm. It was just awful. It was really disappointing.”

Japan parred to win 13 and needed only bogey to win 14 before Miyazato birdied to win 16 and Yokomine birided to win 17 and won at 18, saying “I was so happy to sink that ball.”

“It hurts,” Kirk said. “We’ll go out tomorrow and focus on winning and try and make amends.”

The Thai sisters both birdied to win the first and 11th holes and Ariya took the par-3 sixth with par.

In a match neither side led by more than a hole, Onnarin Sattayabanphot sank a 17-foot birdie putt at 18 to give her and Pornanong Phatlum a 1-up win over Phoebe Yao and Tseng Yani.

“Goosebumps all over,” Onnarin said of her winning putt. “It took everything I had. I’m glad it went in.”

Thailand has little margin for error Saturday against the Americans.

“It’s going to be difficult for both teams,” Pornanong said. “We will try to keep the same confidence and have fun.”

The US team, with four of the world’s top 12 players, never led a match on Thursday but responded well Friday.

“We came in clutch when we needed to and that was most important,” Thompson said.

“We have to fight as hard as we can fight,” Kerr said.

“It’s going to mean a lot if we win tomorrow,” Choi said. “But it’s not going to be easy.”